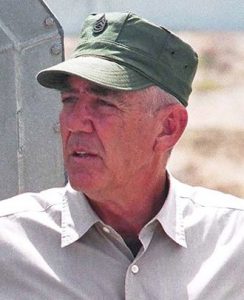 Ronald Lee Ermey (March 24, 1944 – April 15, 2018)[2][3] was an American actor and voice actor. Ermey is known for playing Gunnery Sergeant Hartman in Full Metal Jacket, which earned him a Golden Globe Award nomination for Best Supporting Actor. He is a former United States Marine Corps staff sergeant and an honorary gunnery sergeant; during his tenure in the U.S. Marine Corps, he served as a drill instructor.

Ermey has hosted two programs on the History Channel: Mail Call, in which he answered viewers’ questions about various military issues both modern and historic; and Lock N’ Load with R. Lee Ermey, which concerned the development of different types of weapons. He also hosted Gunny Time on the Outdoor channel.

Ermey was born in Emporia, Kansas, on March 24, 1944. He grew up with five brothers on a farm outside of Kansas City, Kansas.[4] In 1958, when Ermey was 14, he and his family left Kansas and moved to Toppenish, Washington.[4]As a teenager, Ermey often got in trouble with the local authorities, and had been arrested twice for criminal mischief by age 17.[4] After his second arrest, a judge gave him a choice between joining the military or being sent to jail; Ermey chose the military.

Ermey then served in Marine Wing Support Group 17 at Marine Corps Air Station Futenma in Okinawa, Japan.[4] In 1968, he was ordered to Vietnam with MWSG-17, and spent 14 months in country. The remainder of his service was on Okinawa where he was advanced to staff sergeant (E-6). He was medically discharged in 1972 because of several injuries incurred during his service.[5] On May 17, 2002, he received an honorary promotion to gunnery sergeant (E-7) by the Commandant of the Marine Corps, General James L. Jones.

Ermey was cast in his first film while attending the University of Manila in the Philippines, using his G.I. Bill benefits. He played a First Air Cavalry chopper pilot in Apocalypse Now,[6] doubling as a technical advisor to director Francis Ford Coppola. Ermey then was cast as a Marine drill instructor in Sidney Furie‘s The Boys In Company C. For the next few years, Ermey played a series of minor film roles until 1987, when he was cast as drill instructor Gunnery Sergeant Hartman in Stanley Kubrick’s Full Metal Jacket.[6]

Initially, he was intended to be only the technical advisor.[6] Kubrick changed his mind after Ermey put together an instructional tape, in which he went on an extended tirade towards several extras, convincing Kubrick he was the right man for the role.[6] Seeking authenticity for the film, Kubrick allowed Ermey to write or edit his own dialogue and improvise on the set, a notable rarity in a Kubrick film. Kubrick later indicated that Ermey was an excellent performer, often needing just two or three takes per scene, also unusual for a Kubrick film.[7]

Ermey has since appeared in about 60 films, including Purple Hearts, Mississippi Burning, The Siege of Firebase Gloria, Dead Man Walking, Se7en, Fletch Lives, Leaving Las Vegas, Prefontaine, Saving Silverman, On Deadly Ground, Sommersby, Life, Man of the House, Toy Soldiers, and The Salton Sea, as well as the remake of Willard, and as an evil sadist in two The Texas Chainsaw Massacre films.

Ermey also lent his voice to The Grim Adventures of Billy & Mandy, Toy Story, Toy Story 2, and Toy Story 3, as well as Roughnecks and X-Men 3. He usually appears in a commanding military role, for shows such as Kim Possible, The Simpsons, Family Guy, SpongeBob SquarePants, Miami Vice, House, Scrubs, My Life as a Teenage Robot, and Invader Zim, in addition to hosting the documentary series Mail Call and Lock N’ Load with R. Lee Ermey. 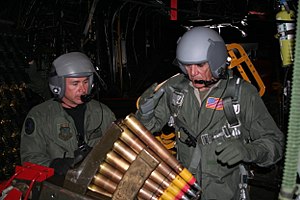 On December 14, 1994, Ermey played a Sheriff in Tales from the Crypt, season six, episode nine, “Staired In Horror.”[8] He also played the role of Reverend Patrick Findley, a minister on The X-Files Season 3, Episode 11 Revelations (The X-Files). On Mail Call, Ermey discussed weaponry, tactical matters, and military history. Mail Call‘s subject matter was dictated by viewer emails; one episode focused on an M1 Abrams tank, while others involved World War II secrets, and others focused on elements of medieval warfare. The set consisted of a military tent, other military gear and weapons, and a WW2 jeep.

Ermey traveled to Kuwait in June 2003 during the first phase of Operation Iraqi Freedom to film mail distribution by the Defense Department to service personnel for an episode of Mail Call. According to a 2005 episode of Mail Call filmed at Whiteman Air Force Base, he is the 341st person to fly in the B-2 stealth bomber. He also guest-starred in the episode “Second Chance” of Human Target.

Ermey also made guest appearances on the TV drama House, playing the role of Dr. Gregory House‘s father, who was a decorated naval aviator while serving in the Marine Corps (“Birthmarks“, “Daddy’s Boy“), and the sitcom Scrubs, playing the Janitor‘s father. He has also voiced Wildcat in several episodes of Batman: The Brave and the Bold. In an episode of The Simpsons entitled “Sideshow Bob’s Last Gleaming“, Ermey voiced Colonel Leslie “Hap” Hapablap.

In the episode of SpongeBob SquarePants, “Inmates of Summer”, he voiced an irate warden of a maximum-security island prison who demoralized the inmates whenever he could. In the episode of The Angry Beavers, “Fancy Prance”, he voiced the Lipizzaner stallions‘ instructor, Drill Sergeant Goonther.

In late 2010, Ermey starred in a GEICO commercial as a drill-instructor-turned-therapist who insults a client, in a parody of some of his iconic characters.[6] Ermey also was featured each week on ESPN‘s College GameDay. His role was to insult the experts’ incorrect picks from the previous week. In that same year, Ermey appeared in the Law and Order: Special Victims Unit episode “Trophy” as a paroled sex offender.

Ermey serves as host of GunnyTime, a program that debuted on Outdoor Channel in 2015.

Ermey lends his voice to several video games, including Fallout Tactics: Brotherhood of Steel (as General Barnaky) and Crash Bandicoot: The Wrath of Cortex (as Wa-Wa). He also made a cameo in Real War: Air, Land, Sea, a retail real-time strategy computer game based on the official Joint Chiefs of Staff training game. In 2014, he did voice-over work for Call of Duty: Ghosts.

Several characters have made references to Ermey and the character of Hartman. In the game Fallout 3, a recruitable companion is named Sergeant RL-3, a modified military robot with a personality very similar to Ermey (the companion’s name is a reference to Ermey’s initials wherein the 3 is leetspeak for the letter E). In the World of Warcraft: Cataclysm expansion is a character named “Lieutenant Emry” that speaks some of Ermey’s signature lines from Full Metal Jacket. In Half-Life: Opposing Force, the drill sergeant from the initial boot camp stage had dialogue and mannerisms very similar to Ermey’s character in Full Metal Jacket.

Ermey is an official spokesman for Black Book (National Auto Research), Glock firearms, TRU-SPEC apparel, Tupperware, Victory Motorcycles, Hoover, SOG Specialty Knives, WD-40, Young Marines, and has appeared in commercials for Coors Light, Dick’s Sporting Goods, GEICO, and pistachio nuts. He has provided the introduction for the Professional Bull Riders.[9] He can be seen giving a service announcement for Alamo Drafthouse Cinemas, demanding that viewers be quiet during the film.[10] He is a board member for the National Rifle Association.[11]

Ermey is the co-founder of the Bravery Brewing in Lancaster, California.[12]

Ermey describes himself as an independent. In 2008, he voted for Barack Obama, but subsequently criticized his policies.[4] Ermey said in an interview earlier in 2015 that he supported Texas Senator Ted Cruz for President. He said, “You know what, I just watched Ted Cruz – I mean, what a tough act to follow. I’m not going to tell you who I’m going to vote for, but I’m going to let you guess […] and the first two guesses don’t count!”[13]

On December 10, 2010, Ermey denounced the Obama administration‘s economic policies while speaking at a Marine Corps Reserve’s Toys for Tots rally, stating that it was difficult to raise money for the charity because “the economy sucks”. He went on to say:

In January 2011, Ermey posted an apology on his website, saying:

In spite of his apology, Ermey later told TMZ that he was “fired” by GEICO, which is owned by noted Obama supporter Warren Buffett‘s Berkshire Hathaway, with whom he made the above-mentioned 2010 “Drill Sergeant” commercial, because of his political beliefs.[16] The insurance giant also removed Ermey’s commercial from their official YouTube channel.[citation needed]

Ermey subsequently stated that his anti-Obama views had caused him to be blackballed by Hollywood, resulting in a lack of new film roles for him.[1]

Ermey knows Donald Trump Jr, and stated that he was confident that should Donald Trump become president, “our Second Amendment rights are solid as a rock”.[17]

On May 17, 2002, Ermey received an honorary post-service promotion to gunnery sergeant (E-7) from the Commandant of the Marine Corps General James L. Jones in recognition of his continuing support to Americans in military service.

He has also conducted morale tours visiting United States troops in locations such as Al Kut, Iraq, and Bagram Airfield, Afghanistan, in which he filmed parts for his television show Mail Call. While at Bagram Airfield, he held a USO-type show in which he portrayed GySgt Hartman and conducted a comedy routine. He also did the same at Doha, Qatar and Camp Doha, Kuwait City, Kuwait, in 2003.

Ermey married his wife, Nila, in 1975. They have four children. In Ermey’s television show Lock N’ Load with R. Lee Ermey, he refers to his wife as “Mrs. Gunny”. He is also the official celebrity spokesperson of the youth organization, Young Marines.

Ermey was retroactively awarded the Marine Corps Drill Instructor Ribbon after he retired from the military due to his prior service as a Marine Corps recruit training instructor. Ermey’s military awards include:[18]

He also starred in an instructional training video for Lockheed Martin dealing with the problems caused by Foreign Object Damage in manufacturing military equipment.