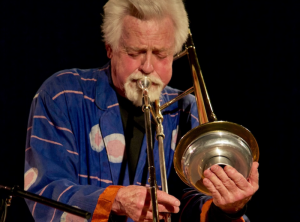 Roswell Hopkins Rudd Jr. (November 17, 1935 – December 21, 2017)[1] was an American jazz trombonist and composer. Although skilled in a variety of genres of jazz (including Dixieland, which he performed while in college) and other genres of music, he was known primarily for his work in free and avant-garde jazz. Since 1962 Rudd had worked extensively with saxophonist Archie Shepp.[2] h1>
Contents [hide]
1/h1>
Biography
2
Awards and honors
3
Discography
3.1
As leader
3.2
As sideman
4
References
5
External links