Anyone who is a connoisseur of rock music knows of the Van Zant family from Jacksonville, Florida. Known as the “First family of southern rock”, the family has produced three major bands: Lynyrd Skynyrd, 38 Special, and the Johnny Van Zant band. Now there is yet another band born into the “first family”: Shanytown from Jacksonville, Florida. And the Van Zant legacy continues…Shanytown is comprised in part by brothers Robbie Morris (Drums) and Ronnie Morris (lead vox), nephews of the late Ronnie Van Zant, and Donnie and Johnny Van Zant of Lynyrd Skynyrd and 38 Special, and The Johnny Van Zant Band. Robbie’s musical roots are deep and as fine as his uncles’, and like his uncles he’s the real deal. Robbie learned drums at age ten and began his professional career at age fourteen when he and his uncle Johnny established the “Austin Nichols” band which segued into the “Johnny Van Zant Band”. Together they made six albums and toured for years until Johnny joined Lynyrd Skynyrd as frontman. Robbie is an acclaimed drummer both in the states and Europe, and played with several bands until Shanytown was established. He retains a worldwide following from his days with the Johnny Van Zant Band, and now with Shanytown. It is said that a band is only as good as the drummer and Shanytown, no doubt, has one of the best drummers in the industry.Ronnie is also highly experienced having begun his musical career as lead vox and guitar as a teenager.Bassist Charles Moody (bass) has been playing bass the majority of his life, and has played with some of Nashville’s finest artists, including the Bellamy Brothers and Loretta Lynn.Duane Johnson, (guitar/vocals) has also been playing since he was a teenager and has played with several bands, including a band he founded “Single Handed”. He also played with “Confederate Outlaw”. Duane “grew up” with Robbie and is a life-long friend of the Van Zants.Robbie Gay (lead guitar) has been playing guitar since he was ten years old. He played in the Johnny Van Zant Band for 15 years touring the US and Europe. Not only was he a guitarist, but he was a songwriter for the band. He can be attributed to writing 20 hit songs for the Johnny Van Zant Band to include “Who’s Right or Wrong”, “Coming Home”, “Standing in the Darkness”, Love Can Be So Cruel” “Only the Strong Survive”, “Yesterday’s Gone”, and more. He has been reunited with Robbie Morris after 20 years. Together, the band carries on the Van Zant family tradition forging a new path with their own style that rivets audiences. Shanytown cannot be pigeonholed as “Southern Rock’ or “Rock”, or “Country”, even though they incorporate all the genres. Shanytown melds the genres into its own unique sound that brings something to everyone, whether they are fans of county, rock, or southern rock.

Shanytown enjoys radio play in the United States and across the globe from Japan to France, Australia to the UK and all points in-between, as well as consistently strong global CD and MP3 album sales. We have been #1 in sales for our genre multiple times on Amazon. 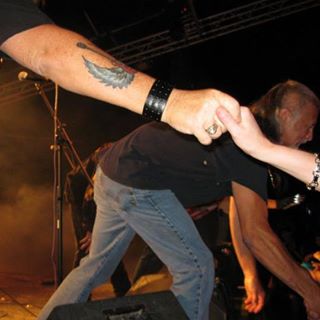