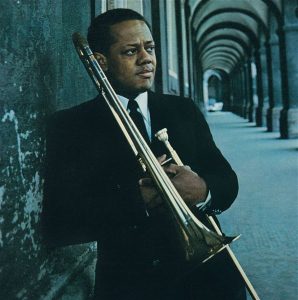 Locksley Wellington “Slide” Hampton (April 21, 1932 – November 20, 2021) was an American jazz trombonist, composer and arranger. Described by critics as a master composer, arranger and uniquely gifted trombone player, Hampton’s career is among the most distinguished in jazz.[1] As his nickname implies, Hampton’s main instrument is slide trombone, but he also occasionally plays tuba and flugelhorn.

Slide Hampton was born in Jeannette, Pennsylvania. Laura and Clarke “Deacon” Hampton raised 12 children, taught them how to play musical instruments and set out with them as a family band. The family first came to Indianapolis in 1938. The Hamptons were a very musical family in which mother, father, eight brothers, and four sisters, all played instruments.[2] His sisters included Dawn Hampton and Virtue Hampton Whitted. Slide Hampton is one of the few left-handed trombone players. As a child, Hampton was given the trombone set up to play left-handed, or backwards; and as no one ever dissuaded him, he continued to play this way.[3][4]

At the age of 12, Slide played in his family’s Indianapolis jazz band, The Duke Hampton Band. By 1952, at the age of 20, he was performing at Carnegie Hall with the Lionel Hampton Band. He played with the Buddy Johnson‘s R&B band from 1955–1956, then became a member of Maynard Ferguson‘s band (1957–1959), where he played and arranged, providing excitement on such popular tunes as “The Fugue,” “Three Little Foxes” and “Slides Derangement.” In 1958, he recorded with trombone masters on the classic release of Melba Liston, Melba Liston and Her ‘Bones. As his reputation grew, he soon began working with bands led by Art Blakey, Tadd Dameron, Barry Harris, Thad Jones, Mel Lewis, and Max Roach, contributing both original compositions and arrangements. In 1962, he formed the Slide Hampton Octet, with horn players Freddie Hubbard, and George Coleman. The band toured the U.S. and Europe and recorded on several labels.

In 1968 he toured with Woody Herman orchestra, settling in Europe where he remained until 1977. He taught at Harvard, artist-in-residence in 1981,[5] the University of Massachusetts, De Paul University in Chicago, and Indiana State University. During this period he led World of Trombones, his own nine-trombone, three-rhythm band; co-led Continuum, a quintet with Jimmy Heath that plays the music of Tadd Dameron; and freelanced as a writer and a player. In 1986 Hampton appeared in “Play It Again, Russell,” an episode of The Cosby Show.[6] He also played the trombone in Diana Ross Live! The Lady Sings… Jazz & Blues: Stolen Moments (1992), DVD.[7]

On June 4, 2006, Hampton promoted his first concert at The Tribeca PAC in New York City (a tribute to Antonio Carlos Jobim) and debuted the Slide Hampton™ Ultra Big Band. The concert was the first of many planned for the near future.[8]

Hampton has been a resident of East Orange, New Jersey.[9]

2009 saw the completion of four new compositions titled “A Tribute to African-American Greatness”. The songs honored Nelson Mandela, Oprah Winfrey, Tiger Woods, Venus Williams, Serena Williams and Barack Obama. The songs contained accompanying lyrics written by Hampton and Tony Charles, arrangements honoring Thelonious Monk, Thad Jones, Eddie Harris, Dexter Gordon and Gil Evans round out the program. The album will be recorded in 2010. He recently completed two new Big Band arrangements – “In Case of Emergency” and “The Drum Song” (both Hampton originals). These two songs (and others) will be available exclusively to universities and other educational institutions through Slide Hampton Musique Publishing.

In 1998 he won a Grammy Award for “Best Jazz Arrangement Accompanying Vocalist(s)”, as arranger for “Cotton Tail” performed by Dee Dee Bridgewater. He was also a Grammy winner in 2005[10] for “Best Large Jazz Ensemble Album,” The Way: Music of Slide Hampton, The Vanguard Jazz Orchestra (Planet Arts), and received another nomination in 2006 for his arrangement of “Stardust” for the Dizzy Gillespie All-Star Big Band.

In 2005 Hampton was honored at the jazz festival in Indianapolis. There the Indianapolis Jazz Foundation inducted him into their Hall of Fame.[11]

In 2005, the National Endowment for the Arts honored Slide Hampton™ with its highest honor in jazz, the NEA Jazz Masters Award.