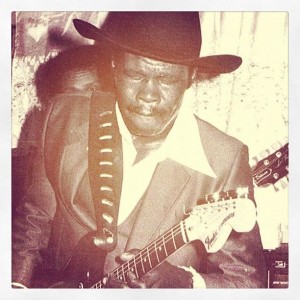 THE REAL DEAL!!! SMOKEY WILSON HAS DIED. FIRST PHOTO WAS WHEN I WAS ON THE BULLSEYE BLUES TOUR. SMOKEY USE TO SAY, I BRING THE COTTON FIELDS WITH ME, WHERE EVER I GO!! RIP MY FRIEND. LOVE ALWAYS.

Smokey Wilson (born Robert Lee Wilson, July 11, 1936, Glen Allan, Mississippi, United States)[1] and raised in Lake Village, Arkansas, is an American West Coast blues guitarist. He has spent most of his career performing West Coast blues and juke joint blues in Los Angeles, California. He has recorded a number of albums forrecord labels such as P-Vine Records, Bullseye Blues and Texmuse Records. His career got off to a late start, with international recognition eluding him until the 1990s.

Wilson played alongside Roosevelt “Booba” Barnes, Big Jack Johnson, and Frank Frost, before his move to Los Angeles in 1970.[2] He opened the Pioneer Club in Watts, where he was the frontman of their house band. In addition his duties included booking blues musicians to appear at the club, which included Big Joe Turner, Percy Mayfield, Pee Wee Crayton and Albert Collins.[1] His down to earth guitar playing is typical of his Mississippi Delta background. “I bring the cotton-field with me,” he said, “and I got the juke-joint inside.”[2]

Wilson released two albums on Big Town Records in the 1970s.[1][2] His 1983 album, 88th Street Blues, for the Murray Brothers label (later re-issued on Blind Pig Records) had contributions from Rod Piazza(harmonica and record producer) and Hollywood Fats (rhythm guitar).[1] Wilson has performed three times at the Long Beach Blues Festival, in 1980, 1981 and 1999; having earlier appeared at the San Francisco Blues Festival in 1978.