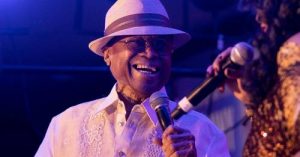 Sonny Turner (September 24, 1939 – January 13, 2022) was an American singer. Turner hailed from Fairmont, West Virginia, and was best known for replacing Tony Williams as lead singer of The Platters.

Prior to his work with The Platters, Turner was the lead singer of a local vocal group called The Metrotones. While performing in a local club in Cleveland as the opening act for Redd Foxx, Turner was approached by local DJ Bill Crane and asked if he would be interested in auditioning for The Platters, as their lead singer as Tony Williams was soon to be leaving the group. Turner was chosen out of 100 hopeful auditioners to replace Williams in late 1959. Turner, whose friend and mentor was Jackie Wilson, breathed new life into The Platters with three hit singles; “I Love You 1000 Times” in 1966, “With This Ring” in 1967 and “Washed Ashore” in 1968. He also re-recorded many of The Platters hits of the 1950s, and it is Turner’s vocals that are heard on the soundtracks for films such as The Nutty Professor 2 and Hearts in Atlantis. Turner died from throat cancer in Los Angeles on January 13, 2022, at the age of 82.[1]