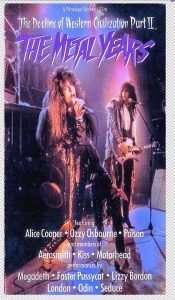 Stephen M. Perry (August 13, 1958[1] – August 5, 2019), who used the stage name Lizzie Grey, was an American professional musician. He is perhaps best known for his membership as a guitarist in the heavy metalband London and for co-writing the Mötley Crüe song “Public Enemy #1”. From 1990 until his death in 2019, he performed with the glam rock band Spiders & Snakes.

He was the guitarist for the band Sister with Blackie Lawless and Nikki Sixx in the mid-to-late 1970s. Thereafter he formed the band London with Nikki Sixx, drummer Dane Rage, keyboardist John St. John, and vocalist Henri Valentine, who was later replaced by Nigel Benjamin, formerly of Mott. The band garnered a huge following of glam rock fans from the late 1970s, spearheaded by the interests of such notables as Rodney Bingenheimer and Kim Fowley. Differences arose between Nikki Sixx and Nigel Benjamin, and the band finally broke up. Shortly afterward there was a revision of the band London featuring vocalist Nadir D’Priest, which recorded internationally recognized albums and was featured in the movie The Decline of Western Civilization Part II: The Metal Years. This version of London continued until the late ’80s, when Lizzie decided to take over his own lead vocals, forming the band Ultra Pop which was heavily influenced by the band T-Rex, with Vince Votel, Ernie Machado, and Chris Solberg.[2] Ultra Pop changed its name to Spiders & Snakes in 1990 with the addition of drummer Timothy Jay.

Spiders & Snakes made several recordings beginning in the 1990s. In 2000, just after the release of the album London Daze, bassist Leigh Lawson died.[3] During this brief split in the band membership, Lizzie explored musical endeavors with various bands in Arizona before returning to Los Angeles to carry on the legacy of Spiders & Snakes where it remains to this day, with current band members Chris Sheridan, Phil St. Vincent and Timothy Jay.

Grey’s maternal uncle was radio commentator Wally George, and he is thus the cousin of actress Rebecca De Mornay.[4]

On the evening of August 4, 2019, Grey died from Lewy Body disease after being diagnosed with it 11 years prior.[5]