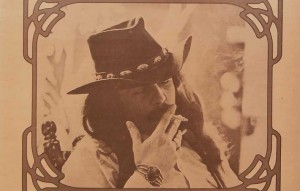 Outlaw Country Songwriter Steve Young Has Passed Away
Though Young was considered mostly a background member of the Outlaw movement for many years, his appearance on the legendary Outlaw…
SAVINGCOUNTRYMUSIC.COM|PAR TRIGGER

Steve Young (July 12, 1942 – March 17, 2016) was an American country music singer, songwriter and guitarist, known for his song “Seven Bridges Road” (on Rock Salt & Nails & Seven Bridges Road). He was a pioneer of the country rock, Americana, and alternative country sounds, and also a vital force behind the “outlaw movement” that gave support to the careers of Waylon Jennings, Hank Williams, Jr. and more. Young was also featured in the 1975 Outlaw Country documentary Heartworn Highways. He was the subject of the song “The All Golden” by Van Dyke Parks. Steve’s first album, Rock Salt & Nails, on A&M, was performed on and supported by: Gram Parsons, Gene Clark and other notable legends from the 1969 musical community and era of Southern California.

Born in Newnan, Georgia, he grew up in Gadsden, Alabama, Georgia and Texas, moving from place to place as his family searched for work.[1] By the time he had completed high school, Young was playing and writing songs that incorporated influences of folk, blues, country and gospel that he absorbed while travelling throughout the South. In the late 60s he worked with Van Dyke Parks and was member of the psychedelic country band Stone Country.

Steve Young wrote many songs, including outlaw classics such as “Lonesome, On’ry and Mean” (covered by Waylon Jennings) and “Montgomery In the Rain” (covered by Hank Williams, Jr.).

His best-known composition is “Seven Bridges Road“, which became a major hit for Eagles when they included a cover of it on their live album in 1980. Earlier covers of the song were done by Joan Baez, Tracy Nelson & Mother Earth, Ian Matthews, and Rita Coolidge.

In 1984, Young charted the single “It’s Not Supposed to Be That Way” on RCA Records. It peaked at No. 84 on Hot Country Songs.[2] In 1989, Steve did a mini tour in the Northwest with singer/songwriter Tim Otto, performing in Portland, OR & Seattle, WA. In 1991, Otto took the cover shot for Steve Young’s Solo/Live CD on Watermelon Records. Townes Van Zandt wrote the liner notes (Austin). The 1996 concert recording byVan Dyke Parks entitled Moonlighting: Live at the Ash Grove (released in 1998) was headlined by Steve Young although he doesn’t appear on the recordings. Van Dyke Parks stated in the introduction to the song “The All Golden,” that it was written about Steve Young. However, this comment does not appear on the recording of the concert.