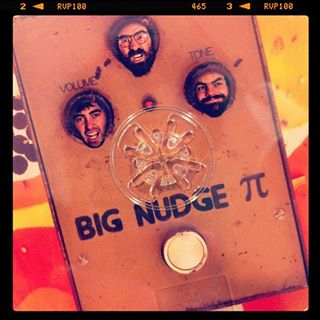 WEBSITE​​YOUTUBE​​BANDCAMP​FACEBOOK​​TWITTER Bookings: James Coyle +64 22 546 6972 reverend.blackkeys@gmail.com 123 Daniell St Wellington NZ The Nudge are a fresh form of innovative blues and roots. “Keen for a Nudge?” The Nudge have been forming their genre crossing sound since 2010. Formed initially from Ryan Prebble wishing to expand what was originally a solo project. Elements of blues were naturally there, however with the addition of Coyle and Whakamoe, The Nudge has come to find their sound far more psychedelic and hypnotic. What establishes these guys as unique is there ability to full the sonic’s of the music, both layered and texturally, to be a crucial part of their song writing. Often tribal in rhythm, the element of a party and dance vibe is never far away from the heart of the songs. This heart of the Nudge is best described in their debut album “Big Nudge Pie” released in 2011 The Nudge, is increasingly exploring the cinematic & performance side of its music, taking audiences on a journey they are not likely to forget. Through their collaboration with composer John Psathas in 2014/2015 there is a strong element of orchestration and exploration of arrangements, which will feature in their second full length album due for release summer 2015 & 2016.

The Nudge – Moving In You

WEBSITE​​YOUTUBE​​BANDCAMP​FACEBOOK​​TWITTER Bookings: James Coyle +64 22 546 6972 reverend.blackkeys@gmail.com 123 Daniell St Wellington NZ Individual Biographies Iraia Whakamoe ­ Hawkes Bay NZ ​(Nga Tuhoe) Active Projects: The Nudge, A Hori Buzz, Fly My Pretties. Iraia is a naturally talented party drummer, always thinking of the dance floor, and the dynamics of the beat. Through his tireless work in the movie & music industry Iraia has carved a unique path, and his career is blossoming. Growing up in the regions gave Iraia a great sense of hard work, and chasing after your dreams in the difficult industry of music in NZ. James Coyle ­ Canterbury NZ Active Projects: The Nudge, Newtown Rocksteady, Fly My Pretties. “..I feel most comfortable in music as an accompanist, a player who listens to songs and expands on thoughts, ideas…” James is an accomplished musician and events specialist, managing the music for NZ’s largest annual outdoor street concert & Market, the Newtown Festival. James often ends up in the driving seat for bringing ideas and projects together. Musically his style is very similar to Ray Manzarek of The Doors, performing as the bassist and organist for The Nudge. Ryan Prebble ­ Hawkes Bay NZ Active Projects: The Nudge, Fly My Pretties, Spartacus R “.. I’ve always had a deep love for music. I can remember as a small boy walking around the house singing at the top of my lungs, and then picking up a tennis raquet and strumming it like a guitar. When i play music, i feel like i’m at home. It’s my natural place. Where i can communicate with people without talking or even looking at them..” Ryan Prebble is a songwriter, arranger, producer and accomplished engineer. As the Leader of the band musically, Ryan shapes the music with a great sense of audio, and knowing how to bring interesting ideas to completion. WEBSITE​​YOUTUBE​​BANDCAMP​FACEBOOK​​TWITTER Bookings: James Coyle +64 22 546 6972 reverend.blackkeys@gmail.com 123 Daniell St Wellington NZ