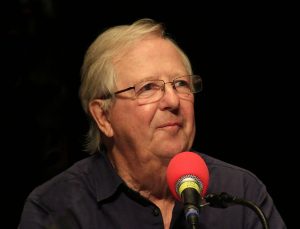 Timothy Julian Brooke-Taylor OBE (born 17 July 1940) is an English comedian and actor. He became active in performing in comedy sketches while at Cambridge University, and became President of the Footlights club, touring internationally with the Footlights revue in 1964. Becoming wider known to the public for his work on BBC Radio with I’m Sorry, I’ll Read That Again, he moved into television with At Last the 1948 Show working together with old Cambridge friends John Cleese and Graham Chapman. He is best known as a member of The Goodies, starring in the television series throughout the 1970s and picking up international recognition in Australia and New Zealand. He has also appeared as an actor in various sitcoms, and has been a panellist on I’m Sorry I Haven’t a Clue for over 40 years.

Brooke-Taylor was born in Buxton, Derbyshire, England, the grandson of Francis Pawson, a parson who played centre forward for the English football team in the 1880s.[1] His mother was an international lacrosse player and his father a solicitor. He was expelled from primary school at the early age of five and a half.[2] Brooke-Taylor was then schooled at Thorn Leigh Pre-Preparatory School, Holm Leigh Preparatory School (where he won a cup for his prowess as a bowler in the school cricket team) and Winchester College which he left with seven O-levels and two A-levels in English and History.[citation needed]

After teaching for a year at Lockers Park School, a preparatory school in Hemel Hempstead and a term back at Holm Leigh School as a teacher,[3] he studied at Pembroke College, Cambridge. There he read Economics and Politics before changing to read Law, and mixed with other budding comedians, including John Cleese, Graham Chapman, Bill Oddie, Graeme Garden and Jonathan Lynn in the prestigious Cambridge University Footlights Club (of which Brooke-Taylor became President in 1963).[4][5]

The Footlights Club revue, A Clump of Plinths was so successful during its Edinburgh Festival Fringe run, that the show was renamed as Cambridge Circus and the revue transferred to the West End in London, and then later taken to both New Zealand and to Broadway in the United States in September 1964.[4][5] He was also active in the Pembroke College drama society, the Pembroke Players.

Brooke-Taylor moved swiftly into BBC Radio with the fast-paced comedy show I’m Sorry, I’ll Read That Again in which he performed and co-wrote.[4] As the screeching eccentric Lady Constance de Coverlet, he could be relied upon to generate the loudest audience response of many programmes in this long-running series merely with her unlikely catchphrase “Did somebody call?” uttered after a comic and transparent feed-line, as their adventure story reached its climax or cliffhanger ending. Other members of I’m Sorry, I’ll Read That Again were John Cleese, Bill Oddie, Graeme Garden, David Hatch and Jo Kendall.[4]

In the mid-’60s, Brooke-Taylor performed in the TV series On the Braden Beat with Canadian Bernard Braden, taking over the slot recently vacated by Peter Cook in his guise as E. L. Wisty. Brooke-Taylor played a reactionary right-wing city gent who believed he was the soul of tolerance.

In 1967, Brooke-Taylor became a writer/performer on the television comedy series At Last the 1948 Show, with John Cleese, Graham Chapman and Marty Feldman.[4] The “Four Yorkshiremen” sketch was co-written by the four writers/performers of the series.[6] The sketch was one of the few which survived the destruction of the series (by the tapes being wiped), by David Frost‘s Paradine Productions (which produced the series), and the sketch appears on the DVD of At Last the 1948 Show. Footage of Tim Brooke-Taylor and John Cleese, from At Last the 1948 Show, was shown on the documentary special Monty Python: Almost the Truth (Lawyers Cut).

Brooke-Taylor also took part in Frost’s pilot programme How to Irritate People in 1968, designed to sell what would later be recognised as the Monty Python style of comedy to the American market. Many of the sketches were later revived in the Monty Python TV series, notably the job interview sketch where Brooke-Taylor played a nervous interviewee tormented by interviewer John Cleese. The programme was also notable as the first collaboration of John Cleese and Michael Palin. One of the sketches mentions John Cleese’s character dating a promiscuous woman named “Christine Weadon”, the name of Brooke-Taylor’s wife.

In 1968–69, Brooke-Taylor was also a cast member and writer on the television comedy series Marty starring Marty Feldman, with John Junkin and Roland MacLeod.[4] A compilation of the two series of Marty has been released on a BBC DVD with the title of The Best of Marty Feldman. During this period Brooke-Taylor appeared as two characters in the film One Man Band directed by Orson Welles, however the project was never completed and remains unreleased.

At around the same time, Brooke-Taylor made two series of Broaden Your Mind with Graeme Garden (and Bill Oddie joining the series for the second season).[4] Describing itself as “An Encyclopedia of the Air”, this series was a string of comedy sketches (often lifted from I’m Sorry I’ll Read That Again), linked (loosely) by a weekly running theme. Nothing but a few minutes of film inserts exist for this programme, though home-made off-air audio recordings survive for both seasons.[citation needed]

The success of Broaden Your Mind led to the commissioning of The Goodies, also with Bill Oddie and Graeme Garden. First transmitted on BBC2 in November 1970, The Goodies was a huge television success, running for over a decade on both BBC TV and (in its final year) UK commercial channel London Weekend Television, spawning many spin-off books and successful records.

During the run of the Goodies, Brooke-Taylor took part in the BBC radio series Hello Cheeky, a bawdy stand up comedy show also starring Barry Cryer and John Junkin. The series transferred to television briefly, produced by the UK commercial franchise Yorkshire Television.[4]

He also appeared on television in British sitcoms, including You Must Be The Husband with Diane Keen, His and Hers with Madeline Smith, and Me and My Girl with Richard O’Sullivan.

Brooke-Taylor also appeared regularly in advertisements, including the Christmas commercials for the Brentford Nylons chain of fabric stores, and in a public information film for the now-defunct E111 form, since replaced by the European Health Insurance Card.

In 1971, he played the short, uncredited role of a computer scientist in the film Willy Wonka & the Chocolate Factory (His scene was the final one filmed for the movie). After the end of The Goodies on UK television, Brooke-Taylor also worked again with Garden and Oddie on the animated television comedy series Bananaman, in which Brooke-Taylor was the narrator, as well as voicing the characters of King Zorg of the Nurks, Eddie the Gent, Auntie and Appleman. He also lent his voice to the children’s TV series Gideon.

Tim appeared, with Bill Oddie and Graeme Garden, in the Amnesty International show A Poke in the Eye (With a Sharp Stick) (during which they sang their hit song “Funky Gibbon“), and also appeared in the Amnesty International show The Secret Policeman’s Other Ball in the sketches “Top of the Form” (with John Cleese, Graham Chapman, John Bird, John Fortune, Rowan Atkinson and Griff Rhys Jones), and “Cha Cha Cha” (with John Cleese and Graham Chapman).

Other BBC radio programmes in which Brooke-Taylor played a part include the self-styled “antidote to panel games” I’m Sorry I Haven’t a Clue which started in 1972, and Tim still appears regularly. On 18 February 1981 Brooke-Taylor was the subject of Thames Television‘s This Is Your Life.

Graeme Garden was a regular team captain on the political satire game show If I Ruled the World. Tim Brooke-Taylor appeared as a guest in one episode, and, during the game “I Couldn’t Disagree More” he proposed that it was high time The Goodies episodes were repeated. Garden was obliged by the rules of the game to rebut this statement, and replied “I couldn’t disagree more… it was time to repeat them ten, fifteen years ago.” This was followed by uproarious applause from the studio audience.

In 2004, Brooke-Taylor and Graeme Garden were co-presenters of Channel 4‘s daytime game show, Beat the Nation, in which they indulged in usual game show “banter”, but took the quiz itself seriously. He has appeared on stage in Australia and England, usually as a middle class Englishman. Around 1982, he branched out into pantomime as the Dame in Dick Whittington. He is also the author (and co-author) of several humorous books based mainly on his radio and television work and the sports of golf and cricket. He also took part in the Pro-Celebrity Golf television series (opposite Bruce Forsyth). Brooke-Taylor appeared on the premiere episode of the BBC golf-based game show Full Swing.

Brooke-Taylor married Christine Weadon in 1968 and they have two sons, Ben and Edward.[7][8] He lives in Berkshire.[9]