Thanks to Felix Reyes for the photo! 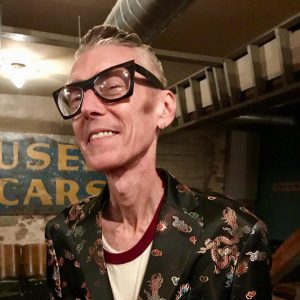 Since 1981, when he saw one of Muddy Waters’ last road performances, Tom Hyslop has been obsessed with the blues. It has been suggested that he has more CDs than most music stores or radio stations. Hyslop has been a staff writer and contributing editor for both Blues Revue and Blues Music Magazine. He has written liner notes as well as hundreds of CD reviews, and has conducted interviews with blues musicians for more than 20 years, with articles on Big Jack Johnson, Gary Clark Jr., Magic Slim, Rick Estrin, Nikki Hill, Nick Moss, John Németh, John Primer, Jody Williams, Li’l Ed Williams, and many others. Hyslop has also contributed year-end best-of lists for Blues Music Magazine and Blues Junction Productions for several years. He has been a talent-buying consultant for the Marquette (Michigan) Area Blues Fest for almost all of its 15-year existence, and for a short time he booked a Marquette restaurant and club, bringing artists such as Johnny Rawls, Phillip Walker, Sean Costello, and Eddie C. Campbell, among others, to his very small hometown. Hyslop has also been a supporter of and organized two successful fundraisers for the Sean Costello Memorial Fund for Bipolar Research.