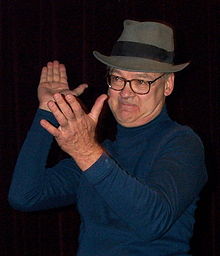 Anthony Schmaltz “Tony” Conrad (March 7, 1940 – April 9, 2016) was an American avant-garde video artist, experimental filmmaker, musician, composer, sound artist, teacher and writer from Baltimore, Maryland.[2] Active in a variety of media since the early 1960s, he is considered to have been a pioneer of both structural filmand drone music (or, as he has qualified, “The first non-bagpipe western drone music”).[3]

Born in Concord, New Hampshire, Conrad was raised in Baltimore, Maryland and Northern Virginia. His father was Arthur Conrad, who worked with Everett Warner during World War II in designing dazzle camouflage for the US Navy.[4]

Conrad was a graduate of Harvard University (A.B., 1962, major Mathematics). In 1960 he went to Copenhagen to see his friend who was a research mathematician and was working on a computer project at Physics Chemist Institute there. That computer was the only computer at the time in Denmark with a memory of 8 Kilobyte. Conrad worked on it in machine language during the summer, which helped build his computer skills. He also did work as a computer programmer for a year when he came back to the United States.[5]

In an interview with Tony Oursler, as part of Oursler’s Synesthesia: Interviews on Rock & Art, Tony Conrad says he moved to New York in the early 1960s and entered into the art picture because of his interest in music, but went to film because it was “too boring” in music. At the time, film was institutionally unattached, which drew Conrad towards the community of New York filmmakers. In 1966, he made his first film, The Flicker, said to be a “landmark in structural filmmaking.” Conrad says, “Since other filmmakers were making films at the time that dealt with structure as a foregrounded principle, and this seemed to be built around mathematical principles, it was adopted as a kind of flagship film for the structural film movement, where it dealt with abstract light-organizing ideas.” The film consists of only completely black and completely white images, which, as the title suggests, produces a flicker when projected. When the film was first screened several viewers in the audience became physically ill. (Rapid flashes produce epileptic attacks in a small percentage of population.) Conrad wished to generalize the whole technology of film.

He approached the film by considering the relationship between the subjective psychological conditions of the flicker, and its relation to narrative and storytelling. He says, “I had felt that my own experience with flicker was a transporting experience in the way that movies affect the imagination at their best by sweeping one away from reality into a completely different psychic environment.”

Yellow Movies is a project that Tony did in 1973. It consists of 20 “movies,” which are square frames painted in black house paint onto large pieces of photographer’s paper. Conrad’s concept came from a continued attempt at pushing the framework of film, and his interest in engaging the audience in long spaces of time. He wanted to make a film that would last 50 years, but knew that “normal materials” could not last that long, so he created a whole new conceptual stratagem for Yellow Movies. The “emulsion” is painted on, and the movies take their own course over time, changing very slowly.

Conrad began to work in video and performance in the 1970s as a professor at Antioch College in Ohio, where he overlapped with the filmmaker Paul Sharits. In 1976, Conrad joined the faculty at the Center forMedia studies at the University at Buffalo.[6] While in Buffalo, Conrad was part of a scene that included Sharits again, as well as Hollis Frampton, Steina and Woody Vasulka, Peter Weibel, James Blue, and Gerald O’Grady. Their practices in film, video, performance, and other forms was documented in the 2008 book Buffalo Heads: Media Study, Media Practice, Media Pioneers, 1973-1990, edited by Vasulka and Weibel.[7]

In the mid-1970s, Conrad began performing film. With Sukiyaki Film he decided that the film should be prepared immediately before viewing. Sukiyaki was chosen as the paradigm for the work because it is a dish often cooked immediately before eating, in front of the diners. Conrad cooked sukiyaki in front of an audience: egg, meat, vegetables, and 16mm film; and literally “projected” onto the screen behind him.

“Well, if you take a roll of film and instead of making pictures on it, you process it by pickling it in vinegar and putting it in a jar and presenting it for people to look at that way, projected through the lens of the fluid around it, this is so distorted and such a monstrous disfigurement of the normal way in which you are ‘supposed to use’ film, that it is a kind of pathology; it’s a sickness in the sense of a virus being inserted in the system. I think wellness and change are measured by comparison to potential for extremes of illness or death. I was trying to kill film. I wanted to let it lay over and die.”

Another of Conrad’s early films, “Coming Attractions” (1970) led indirectly to the founding of Syntonic Research and the Environments series of natural sound recordings.

Conrad’s work has been shown at many museums including the Museum of Modern Art, P.S. 1, and the Whitney Museum of American Art in New York City; the Walker Art Center in Minneapolis; the Louvre in Paris; the Museum of Contemporary Art in Los Angeles; and many others.[8] Specifically, his film The Flicker was included in the Whitney Museum of American Art‘s exhibition, The American Century; he participated in the 2006 Whitney Biennial; and one of his Yellow Paintings was featured in the museum’s 2015-2016 exhibition “Collected by Thea Westreich Wagner and Ethan Wagner.”[9] In 1991, he had a video retrospective at The Kitchen, an artist-run-organization in New York City. In 2006, the full hour-long recording of Conrad’s Joan of Arc was released, a 1968 recording for the soundtrack to Piero Heliczer’s like-named short film.

Conrad’s artwork is represented by Greene Naftali Gallery in New York City,[10] and by Galerie Buchholz in Germany.[11]

Conrad has been a faculty member in the State University of New York at Buffalo since 1976. He continues to teach there in the Department of Media Study[12] as well as work on many notable B&W film image projects with Princess G. St. Mary.

In music, Conrad was an early (though not original) member of the Theatre of Eternal Music, nicknamed The Dream Syndicate, which included John Cale, Angus MacLise, La Monte Young, and Marian Zazeela, and utilized just intonation and sustained sound (drones) to produce what the group called “dream music” (and is now called drone music).

The Theater of Eternal Music performed pieces consisting of long extended tones, in which the performers sustained harmonically related pitches for the duration of each piece. Often, Young performed complex improvisations on saxophone or voice. In recent years, Young (who retains many original recordings) has claimed authorship for the “compositions” the group performed. However, Conrad has characterized those works as collaboration for which he, Angus MacLise, and John Cale should share collective credit. These views remain a source of contention for Conrad and, to a lesser extent, Cale among the former participants in the group.

Conrad’s first musical release, and only release for many years, was a 1972 collaboration with the German “Krautrock” group Faust, Outside the Dream Syndicate, published by Caroline (UK) in 1973. This remains his best known musical work and is considered a classic of minimalist music and drone music.

Recently, Conrad has composed more than a dozen audio works with special scales and tuning for solo amplified violin with amplified strings. Recent releases include Early Minimalism Volume 1, a four-CD set,Slapping Pythagoras, Four Violins (recorded in the 1960s), Outside the Dream Syndicate Alive (with Faust, from London 1995), and Fantastic Glissando. He also issued two archival CDs featuring the work of late New York filmmaker Jack Smith, with whom he was associated in the 1960s.[13] He released the 1968 recording of Joan of Arc in 2006. Conrad played together with Rhys Chatham in an early ensemble. He has also collaborated with artists such as Charlemagne Palestine, Genesis Breyer P-Orridge, Keiji Haino, Jim O’Rourke, David Grubbs, C Spencer Yeh, Tovah Olson, MV Carbon, and numerous others.[14] Conrad was chosen by Animal Collective to perform at the All Tomorrow’s Parties festival that they curated in May 2011.[15]

In 2012 Conrad was part of the line-up of the touring avant garde festival Sonic Protest that took place in five cities in France. In 2013 Conrad visited Genoa to open his first solo exhibition in Italy.[16]

Conrad and The Velvet Underground[edit]

In the early 1960s, Conrad and John Cale were recruited by Pickwick Records to play as a backing band for a new act, The Primitives, to perform the 1964 single “The Ostrich”/”Sneaky Pete.” Conrad and Cale played guitar and bass, the artist Walter de Maria joined on drums, and the only pre-existing member of the band, Lou Reed, sang. Conrad and Cale’s instruments were tuned to “Ostrich” tuning—every string to the same pitch—to make them easier to play, but the uniformity also resonated with the drone music they were playing with the Theatre of Eternal Music. After a few shows, the group disbanded. Cale and Reed went on to form The Velvet Underground.[17]

Conrad is known as being indirectly responsible for the name of The Velvet Underground, although he was not an actual member of the famous group. After moving into Conrad’s old apartment on Ludlow Street in New York City, Reed and Cale found a book entitled The Velvet Underground, which had belonged to Conrad, and took the book’s name for their group.[18]