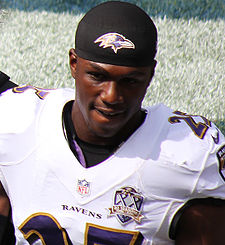 We are grieving the loss of a special young man. ‪#‎RIPTrayWalker‬

Tray Walker (August 5, 1992 – March 18, 2016) was an American football cornerback for the Baltimore Ravens of the National Football League (NFL). He played college football at Texas Southern, and was drafted by the Ravens in the 4th round of the 2015 NFL draft.

Walker died on March 18, 2016 from injuries sustained from a dirt bike accident in Florida.[1]

In his senior year, he earned Second-team All-Southwestern Athletic Conference (2014).

Walker was selected in the 4th round of the 2015 NFL Draft by the Baltimore Ravens making him the highest draft selection from Texas Southern since Joe Burch in 1994. In his only season, Walker played in eight games and contributed primarily on special teams for the Ravens, including two tackles.[3]

On March 17, 2016, Walker was involved in a serious motorcycle accident in Liberty City, Florida.[4] Walker had been dirt biking when he collided with a Ford Escape at an intersection. He was transported to Jackson Memorial Hospital in Miami, Florida in critical condition after sustaining serious head injuries and spent all night in surgery, but died the following evening. Walker was 23.[1]