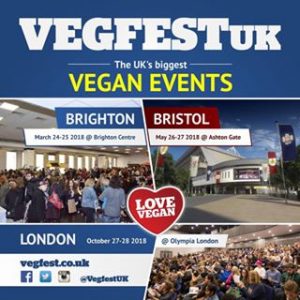 There is more exciting news from The FxEctive Factor vegan musical talent contest at VegfestUK Brighton this year as the organisers have confirmed the appearance of 5 high-profile celebrities for the judging panel at the competition.

After headlining at last year’s VegfestUK Bristol, singer Rozalla is back with VegfestUK at Brighton.

“The Rave Queen” began performing at a young age in her native Zambia singing in clubs and at events.

Rozalla’s notable singles include the 90’s hit “Born to Luv Ya”, and of course the dance anthem “Everybody’s Free (To Feel Good)”, as well as “Faith (In the Power of Love)” and “Are You Ready to Fly?”. Rozalla continues to perform in clubs all over the UK and the world, and has recently released a brand new song “Can You Feel The Love” featuring David Anthony.

After her last appearance at VegfestUK London 2017, TV presenterJasmine Harman is back at the upcoming Brighton event.

Jasmine supports a number of charity projects. Recent events include taking 192 seriously ill children on the holiday of a lifetime to Orlando with Dreamflight, trading billions of pounds on the stock market to raise money for Breast Cancer Care, and dog sledding in the Arctic in -31°C for the Dog’s Trust – not exactly A Place in the Sun!

Journalist, television presenter and animal rights campaignerWendy Turner-Webster has been one of VegfestUK’s regulars at previous events at Brighton and London. Wendy does not eat or wear animals and is Patron of the Vegan Society, Viva! and the Vegetarian Society. Wendy also co-presents her own TV show Crafty Beggars (www.craftybeggars.tv) alongside her good friend Julie Peasgood.

Marc Abraham, or ‘Marc the Vet’ is a practising veterinary surgeon, author, and animal welfare campaigner based in Brighton. Marc qualified from Edinburgh University and has since worked in small animal, mixed, and emergency practice, as well as volunteering overseas for animal rescue projects including vaccinating dogs against rabies in Mumbai, rescuing dancing bears in Ukraine, saving cats and dogs in post-tsunami Thailand, neutering pets in the Amazon, and operating on moon bears in Chengdu, China.

Finally, actor Peter Egan will be back at VegfestUK Brighton 2018 after his appearance in the Easy Veganism panels last year.

Going vegan has had a huge impact for Peter – One of the greats of British TV, theatre and film whose acting career is approaching 50 years.

Starring in the much loved Ever Decreasing Circles in the 80’s and Peter has worked non stop with his more recent role as the Marquess of Flintshire in Downtown Abbey.

Going vegan “simplified and confirmed his life”. Peter campaigns against the dog meat trade and for a vegan lifestyle and was awarded Celebrity Animal Hero of the Year. Peter also brought a great deal of laughter to our VegfestUK awards in London last year and we are delighted that he is coming over to be with us in Brighton.

VegfestUK presenter, VeggieVision TV presenter and radio presenter with a popular weekly radio show in Essex passionate vegan Karin Ridgers is our “Dermot O’Leary”. Karin is a great friend of VegfestUK and has never missed a Brighton event. Karin has been vegan for over 20 years and coaches media and celebrities to be vegan too.

Note on The FxEctive Factor

The FxEctive Factor returns to VegfestUK Brighton in 2018 on the Saturday March 24th 2018 after its debut back in 2016, with vegan musicians showcasing their chosen songs in front of a panel of judges.

The competition for the 8 contestants will be held on Saturday March 24th between 1-4pm on the Performance Stage at VegfestUK Brighton.

Notes to the editor:

Celebrating a decade of the biggest vegan festivals in the UK VegfestUK is  kicking off 2018 as always at the Brighton Centre…. 24th and 25th March 2018.

For advice, vegan support, recipes and media tickets please do drop us a line.

We also have a limited number of day tickets we can provide for prizes.