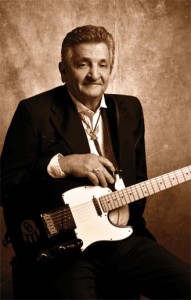 Robert Wootton was born March 4, 1942 in Paris, Arkansas. In 1950, he moved with his family to Taft, California, where Bob heard the music of Johnny Cash for the first time. In 1956, he bought a copy of “I Walk the Line,” even though Wootton did not then own a record player. In 1958, Wootton moved again, this time to Oklahoma, where he lived until joining Cash’s band.

Wootton had been a lifelong fan of Cash’s and played his songs religiously until he had perfected the boom-chicka-boom style known as Cash’s unique sound. By 1968, Wootton was playing gigs regularly in Oklahoma City. After the death of Luther Perkins in a house fire in August 1968, the role of lead guitarist was given to Carl Perkins (no relation) leading to a different sound of the band. On September 17, 1968, Cash was performing in Fayetteville, Arkansas, at a campaign rally for Governor Winthrop Rockefeller. An airline delay left only Johnny Cash and drummer W.S. Holland onstage. Wootton, sitting in the audience, approached Cash requesting to fill in for the night. Wootton stunned the crowd, particularly Cash himself, with perfect renditions of every song. Cash mentioned in passing that he might one day call on Wootton again, but within days asked him to join the tour as new lead guitarist.

Perhaps the most notable performance of Wootton’s career was at San Quentin State Prison where Cash’s live album was recorded. Wootton stood on such tracks as I Walk the Line and Folsom Prison Blues. Wootton continued in the band with only a brief respite until Cash retired from active touring in 1997.[1]

With Cash’s retirement from the stage, Wootton was willing to take non-musician work to earn a living. He worked as a tour bus driver, including a stint for the Smashing Pumpkins. Wootton did not participate in the recording sessions that became known as Cash’s American Recordings albums. From 2006 to 2007, Wootton performed with Cash’s original drummer, W.S. Holland, his wife Vicky Wootton, and daughter, Scarlett Wootton, as The Tennessee Three. In 2006 the band released their first album since Cash’s death, a loving tribute titled “The Sound Must Go On.”

The Tennessee Three was scheduled to perform at Folsom Prison in January 2008, commemorating the 40th anniversary of Cash’s Folsom show. Wootton eventually withdrew from the concert project, which was later scrapped following disputes between prison officials and show promoters. Wootton continued his 2008 touring as the Tennessee Three with drummer Rodney Blake Powell, Vicky, Scarlett, and Montana Wootton to appreciative crowds across the globe. The band continues to tour throughout 2009.