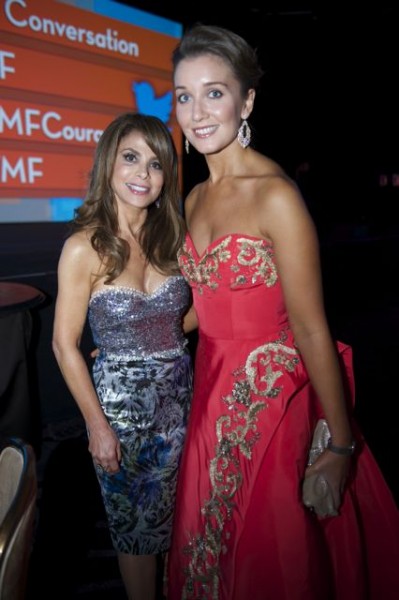 British mezzo soprano Carly Paoli, 25, performed ‘Because of You, a song written specially to honour Pulitzer Prize-winning photojournalist Anya, 48, who was killed while covering the presidential elections in Afghanistan in April.

The performance took place against a montage of Anya’s work and was the first time in the IWMF’s 25-year history a singer had been invited perform at the event.

Miss Paoli, who took to the stage in a spectacular coral, Oscar de la Renta gown, was given a standing ovation by gathered guests including Anya’s mother and sister who had flown from Germany to attend the event on Tuesday.

Carly, an Ambassador for Swiss luxury timepiece brand, Bedat & Co – Geneve, said afterwards: “I felt so honoured and blessed to have been given the chance to pay tribute to a woman as brave and inspiring as Anya Niedringhaus.

“Performing in front of her amazing images and after hearing the inspiring stories of the other ‘Courage in Journalism’ Award winners, emphasised the valuable contribution women make in the media despite the risks they face.

“It was a humbling but inspiring evening and I hope my performance did justice to Anya’s story.”

Former American Idol judge Paula Abdul said: “Carly was amazing. The music and lyrics went hand in glove and put so much meaning into the story being told.

“Carly is just stunning. She is a beautiful singer and she’s beautiful on the inside as well. Her poise and effortless grace were wonderful.

“I told her she has the voice of an angel and it’s effortless with such beauty. It was the perfect song and the perfect singer.”

Glamour magazine editor Cindi Leive added: “It was such a powerful performance and such a beautiful tribute to Anya’s work.

“To hear this gorgeous song with these powerful images that Anya had shot, I just thought was a lovely way to honour the work of this incredible photojournalist.”

“It’s what Anya would have wanted and it’s what the IWMF sets out to do and I’m very honoured to be part of that tribute.”