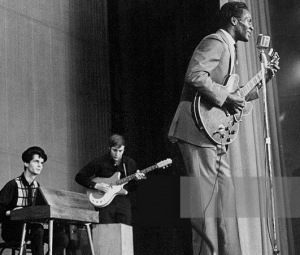 Kalb is not to be confused with the record producer Danny Kalb.[1]

At the age of 15 Kalb formed the band Gay Notes and performed with Bob Dylan on a WBAI-FM concert broadcast in 1961. In 1963 Kalb performed in the Ragtime Jug Stompers with his mentor Dave Van Ronk. In 1964 he recorded as Folk Stringers, produced by guitarist and writer Sam Charters, who has written: “It was generally conceded … that … Kalb was the most exciting of the new players.”.[2] In 1964 Kalb played second guitar on Phil Ochs‘s album All the News That’s Fit to Sing and in 1964 appeared on Judy Collins’s Fifth Album.

In 1965, Kalb formed the Blues Project with Steve Katz, Andy Kulberg, Roy Blumenfeld and Tommy Flanders. Flanders later left the band and was replaced by Al Kooper. They recorded three albums, played frequently at the Cafe Au Go Go and at Murray the K‘s last “submarine race-watching” spectacular at the RKO 58th Street theater in New York, and made several concert tours, disbanding in 1971. In 1965 the Blues Project performed an eleven-minute rendition of Muddy Waters‘s “Two Trains Running” in electronic form, with Waters in the audience. When asked what he thought of it, Waters said, “You really got me.” Kalb later said, “If I’d dropped dead at that point on the spot because of what we thought of Muddy Waters, then my life would have been well spent.”[3] Personality clashes, drugs and the 1960s lifestyle took their toll on the band.[4] Katz and Kooper left to form Blood, Sweat and Tears.[5]

Howard L. Solomon (Cafe au Go Go owner and promoter) wrote in a 1999 email to Kalb’s Webmaster, “Danny Kalb … is up there with the best of all blues legends … His work for me at Cafe’ au Go Go was amazing … I’ve worked with the greatest of all time and he is at the top … Eric Clapton, Mick Taylor, Jimi Hendrix, John Mayall, Zappa, all greats, but Danny will emerge in the top 5.”

In 1968 he released Crosscurrents with Stefan Grossman. He was fairly quiet for the next twenty years, but joined Al Kooper for a Blues Project reunion, recorded at the Bottom Line in 1996.

In the 21st century, Kalb has performed solo acoustic gigs, played acoustic and electric music with the Danny Kalb Trio, including Bob Jones on acoustic bass and Mark Ambrosino on drums and occasionally performed with Stefan Grossman and Steve Katz and with his brother Jonathan Kalb. The Danny Kalb Trio recorded I’m Gonna Live the Life I Sing About (Sojourn) in 2008, which received critical acclaim in the blues media. This was followed in 2013 by Kalb’s first double-CD. Moving in Blue, also on the Sojourn label, featuring various sidemen and guest artists. With this album he parlays the full range of his musical interests and creativity. Due to ongoing health issues, Kalb was no longer able to perform.

Kalb continued to play the vintage early 1960s Gibson J-200 with which he began his career. He also used a Mexican-made Martin acoustic-electric and a Greco Les Paul-style electric guitar. His solo projects included Livin’ with the Blues (Legend 1995), All Together Now( [6] self-released 2002), Live in Princeton (self-released 2003), and Live in Brooklyn (self-released 2006).[3] Crosscurrents, the 1968 LP with Stefan Grossman was re-released as CD in 2006 and a new CD, Played a Little Fiddle, was released in 2007 by Kalb, Katz and Grossman.