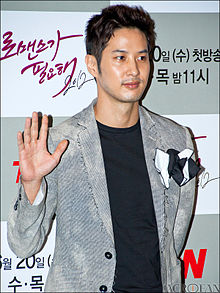 Kim Bo-seok debuted in 2001 as a rapper in the five-member Eurodance boyband LEO (리오), formed to capitalize on the success of then-popular boyband g.o.d. But LEO never hit it big, and the group disbanded after eight months.[1][2]

After failing the exam to get into the theater department, Kim majored in German at the Hankuk University of Foreign Studies. Having attended middle school and high school in England, Kim is also fluent in English and he received his secondary teaching certificate in German and English in 2006.[2] He also has a master’s degree in Cultural Contents Planning from Kyung Hee University‘s Graduate School of Journalism and Communication.

Told by the head of his agency that his birth name could be confused with veteran actors Jung Bo-seok and Kim Bo-seong, he was given the stage name “Kim Ji-seok.”[2]Kim began his acting career by appearing in the 2004 music video of Kim Hyung-joong’s “She’s Laughing”, followed by several minor roles. Though his daily drama Likeable or Not recorded high ratings of over 40% in 2007-2008,[3][4] Kim still did not become a household name. Then a year later, Kim played a member of the Korean national ski jumping team in Take Off, which became the second-highest grossing Korean film in 2009.[5][6][7] His popularity increased even more when he played an immature, womanizing slave hunter (“chuno”) in period drama The Slave Hunters,[2] the lover of a transgender man in comedy Lady Daddy, and a competitive ex-boyfriend in Personal Taste.[8][9]

He enlisted for his mandatory military service on May 24, 2010 at the Nonsan training center in South Chungcheong Province for five weeks of basic training.[10] After serving active duty with the Defense Media Agency of the Ministry of National Defense in Yongsan-dong, Yongsan-gu, Seoul, he was discharged in March 2012.[11][12]Kim’s first post-army acting project was horror film Two Moons (also known as The Sleepless), released in July.[13][14] This was followed by television romantic comedies I Need Romance 2012 in June,[15] and Cheongdam-dong Alice in December.[16]