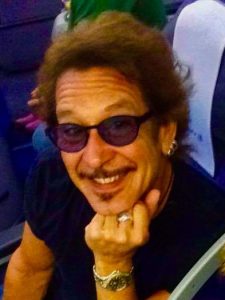 Native Californian George Hawkins Jr.-April’s Question & Answer guest on the Penguin-secured his first real gig in 1976 as a member of the Loggins and Messina band. He recorded his first solo album, an Intercord Record Service release called Every Dog Has Its Day, twenty years later.During the interim, Hawkins sang and played bass and other instruments

for a host of world-class talent, including Don Felder, Firefall, Roger McGuinn, the Monkees, Juice Newton, Dan Fogelberg-and Lindsey Buckingham, Billy Burnette, Mick Fleetwood and Christine McVie.In 1975, Hawkins was living in Ojai, a quiet, secluded community of resorts, spas and golf courses nestled in the Los Padres National Forest, north of Ventura. Jim Messina bought a ranch just outside of town, and Hawkins found himself getting to know some of the guys in the band. Kenny Loggins and Hawkins struck up a close friendship, and Hawkins played bass and sang for the 1977 Loggins and Messina album Finale. Later that year, Loggins parted ways with Messina, and formed his own band, appointing Hawkins band leader.

Over the next four or five years, the Kenny Loggins band toured extensively and recorded some of the decade’s biggest albums, including Celebrate Me Home, Nightwatch (featuring the smash hit single “Whenever I Call You Friend,” with vocals by Stevie Nicks), Keep the Fire, and the 1980 live album Kenny Loggins Alive. “A fantastic band,” Hawkins said about them, “and one of the most wonderful and happiest periods of my life-very creative and formative years that will stay with me for the rest of my life.”

Tris Imboden, the drummer for the Kenny Loggins band, and Hawkins hit it off especially well during that time, and forged a close friendship that has lasted till the present day.

In 1980, Mick Fleetwood called. Hawkins was asked to join the lanky drummer’s pet project. Fleetwood had wanted to journey to Africa to record its native drummers for nearly a decade. A much-needed break in Fleetwood Mac’s grueling tour schedule in late 1980 provided the opportunity. Fleetwood, producer Richard Dashut, guitarist Todd Sharp and Hawkins packed their things-including two portable sixteen-tracks, a board, four huge Rogers Sound Lab speakers, cables, mics and instruments-and set off for Ghana in West Africa. Released in 1981, The Visitorwas not a hit, but proved an enjoyable experience for the musicians involved on both sides of the Atlantic. Hawkins remained active with Fleetwood’s part-time band, The Zoo, for the next few years, handling bass, guitar, keyboards, vocals and songwriting for (technically) The Zoo’s first album I’m Not Me in 1983.

Another Fleetwood Mac alumnus, Lindsey Buckingham, was recording his first solo album in 1981, and tagged Hawkins and Fleetwood to play bass and drums on an endearing folk-rocker with a decidedly modern edge. “Trouble” made it to the near-top of the pop charts that summer, the first single released from the excellent Law and Order.

During his tenure with The Zoo in the early 1980s, Hawkins befriended Zoo guitarist and songwriter Billy Burnette, and played on Burnette’s album Try Me. Also in 1981, Jerry Levin, Al Jarreau (whom Levin co-managed) and Hawkins gigged and roomed together in the Los Angeles area. Stints followed for Hawkins with another jazz legend, David Sanborn, in Europe, and with the Larson-Feiten band, which featured Neil Larson and Buzzy Feiten. Hawkins kept busy with Jarreau until 1985, but also toured extensively with other artists during that period.

In 1984, Hawkins, Todd Sharp and Steve Ferrone joined Christine McVie for her long-awaited first solo album since joining Fleetwood Mac, simply titled Christine McVie. The album was a major hit-with airplay, video play, press coverage and television specials-and McVie and her bandmates took the music to the people on a spring tour of the U.S., winding it up with a sold-out show at L.A.’s Universal Amphitheatre in June 15.

Later that year, Hawkins directed, played bass and sang on one of the most critically acclaimed tours of the year, in support of Rickie Lee Jones’ inventive and mysterious The Magazine. Touring with Michael McDonald followed and continued through 1987, and work with Dan Fogelberg culminated in Fogelberg’s 1990 album Wild Places.

Hawkins headed to Japan in 1988 with Boz Scaggs. While overseas, two f

riends from the Doobie Brothers, John McFee and Keith Knudson, hooked Hawkins up with one of the most popular rock stars in Asia, Eikichi Yazawa. Hawkins toured and recorded with Yazawa off and on for a decade. He put together an original band in 1989 called Emotional Rex, with writer-guitarist Bruce Gaitsch and drummer-vocalist Kelly Keagy (from Night Ranger). The producer Glyn Johns, who later worked on Nicks’ Street Angel, recommended Hawkins for a project in England with Bad Company singer Paul Rogers and The Who drummer Kenny Jones.

Hawkins continued to tour with Yazawa throughout the early and mid-1990s, generally three or four months out of the year. The tour schedule allowed Hawkins to record his first album, Every Dog Has Its Day, which was released in December 1996. Produced by his friend from Emotional Rex, Bruce Gaitsch, Hawkins brought together an impressive array of musicians and vocalists, including Guy Allison on piano, Marc Russo on saxophone and Billy Ward on drums. Jeff Porcaro and Jonathan Moffet programmed drum loops, and Richard Marx, Billy Burnette, Janey Clewer, Bill Champlin (for whom Hawkins had played bass on the 1994 album Burn Down the Night) and Tamara Champlin sang harmonies and backup.

Hawkins worked with Richard Marx periodically for several years in the mid-1990s. “Richard is a sensational singer, writer and performer, and one of the funniest people in the universe,” Hawkins said of the popular vocalist.

The list of Hawkins’ musical contributions is as long as it is varied. His bass playing, vocals and guitar playing can be found on Don Felder’s Airborne, Firefall’s Clouds Across the Sun, Best of Firefall and Greatest Hits, Bruce Gaitsch’s Lyre in a Windstorm, Roger McGuinn’s Back from Rio, Troy Newman’s Gypsy Moon, Juice Newton’s Quiet Lies, Sanford and Townsend’s Smoke from a Distant Fire, Todd Sharp‘s Who Am I?, Gary Wright’s Right Place, Billy Burnette‘s new album Are You With Me Baby, and several albums for The Monkees, including Pool It!, Listen to the Band, Greatest Hits and Anthology.

After moving to Nashville with his family in 1997, Hawkins went out on the road with Deana Carter. In early 1998, he “totally scored the best gig in town with the awesome Texas blues and R&B legend Delbert McClinton,” Hawkins said of the project, which also features guitarist Todd Sharp. “And that’s where I’ve happily been ever since!”