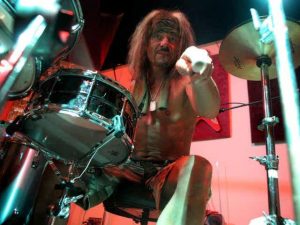 Monroe native Gunner Ross, who gained fame as a drummer with rock ‘n’ roll legend Ted Nugent and other musicians, died Monday after a brief illness. He was 66.

Born Andy Rosinski, Ross was the son of the late Ruth and Raymond Rosinski. He grew up on Bentley Dr. and graduated as a member of Monroe High School’s class of 1973.

He showed at an early age that he was a natural drummer. His older sister, Jeri Bacarella, said her brother began playing drums using cardboard boxes. He got his first set of drums as a pre-teen.

“He was amazing the minute he got them and until the day he died,” Bacarella said. “Most importantly, he was a good man. He never met someone he didn’t like. He had a magnetic personality. He was just a lot of fun.”

Ross played drums with Ted Nugent, an avid hunter and Michigan native. Nugent wrote the hit song Fred Bear, in honor of the archery hunting legend who once lived in Grayling in northern Michigan.

In a video released on his Facebook page, Nugent called Ross a “great drummer who put his heart and soul into the story of Fred Bear.”

“Thank you God for sending Gunner Ross into my life and capturing my love of Fred Bear,” Nugent said on the video. “He was an awesome, awesome Detroit slammer.”

As Ross’ career blossomed, he played in a number of bands, including The Knife, The Almighty Struts and Blackfoot with Rickey Medlocke, who later joined Lynryd Skynryd as lead guitarist and singer. He also helped form the band Send More Cops, which sold thousands of albums and whose songs were often played on Detroit-area rock radio stations and opened for such musicians as Eddie Money.

Ross toured with Nugent from 1989 to 1997 and often jammed with Monroe’s Hunter Brucks, who grew up with Ross and considered him a close friend for decades.

“I loved the guy,” Brucks said. “I spent a lot time with him working on music. He was one of the greatest, if not the greatest rock brothers I had.”

In a 2007 interview with The Monroe News, Ross said he lived in several major cities, including Los Angeles, but moved back to Monroe when his daughter, Taylor, was born more than two decades ago.

I wanted my daughter to grow up in a small town,” he said at the time. “There’s no better place than Monroe. I’ve lived in a lot of different places, but Monroe is the greatest town. That’s why I wanted her to grow up here.”

In 2016 Ross help sponsor a benefit concert to raise money for Monroe’s homeless.

In addition to his sister and daughter, Taylor Ross, now 22, Ross is survived by his wife, Deanna Ross, several stepchildren and a niece, Amy Tayler. Although funeral services will be private, Bacarella said a memorial concert and party, where the public is expected to be invited, will be held at a later date.