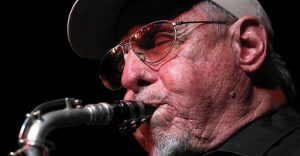 Ira Sullivan (May 1, 1931 – September 21, 2020) was an American jazz trumpeter, flugelhornist, flautist, saxophonist, and composer born in Washington, D.C., United States. An active musician since the 1950s, he worked often with Red Rodney and Lin Halliday.[1]

Sullivan was taught trumpet by his father, saxophone by his mother and played both in 1950s Chicago with such seminal figures as Charlie Parker, Lester Young, Wardell Gray and Roy Eldridge, gaining a reputation as a fearsome bebop soloist. After playing briefly with Art Blakey (1956), and mastering alto and baritone saxophone, Sullivan moved south to Florida and out of the spotlight in the early 60s. His reluctance to travel limited his opportunities to play with musicians of the first rank, but Sullivan continued to play in the Miami area, often in schools and churches. Contact with local younger players, such as Jaco Pastorius and Pat Metheny led to teaching and to a broadening of his own musical roots to include the lessons of John Coltrane‘s music and elements of jazz rock. With the addition of flute and soprano saxophone to his performing range, Sullivan moved to New York and in 1980 formed a quintet with bop trumpeter Red Rodney. Resisting the temptation to play the music of their youth, Sullivan and Rodney worked on new material and fostered young talent to produce some fresh and stimulating music. Ira and his longtime friend and collaborator Stu Katz, jazz pianist and vibraphonist, co-led a multi-night performance with Katz at Joe Segal‘s The Jazz Showcase in Chicago. A live recording of some of those performances, A Family Affair: Live At Joe Segal’s Jazz Showcase, was released in 2011. In 2014, Ira Sullivan performed in concert with jazz vocalist Erin McDougald for a live-recorded concert at 35th Street Studios which featured pianist-guitarist Rob Block, bassist Kelly Sill and drummer Charles Heath along with multi-reed player Marc Berner. Sullivan taught at the Young Musicians Camp each summer at the University of Miami.