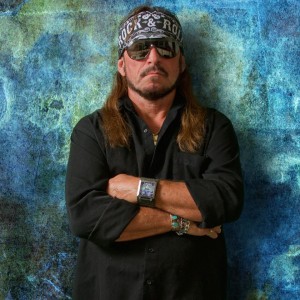 Jimmie was born in Jacksonville, Florida – a city known mostly in the music circles as “the home of southern rock royalty.” Jimmies father, E.C. Van Zant and Ronnie, Donnie and Johnny’s father, Lacy Van Zant, are brothers, linking this famous family together. Jimmie recalls his mother having an upright piano at home where she spent countless hours playing gospel tunes. Jimmie began taking piano and guitar lessons back at age 6. Later, as he grew up in his teen years, he watched and listened to Ronnie Van Zant and the boys rehearse in his own living room, becoming amazed, mesmerized and drawn to their musical perfection. At this time, this musical paring was known as “One Percent” but would later evolve into the legendary Lynryd Skynyrd band.

Throughout his later teen years, Jimmie was sidetracked from the music and took an interest in fast cars, professional bowling tournaments and other hobbies while all along the desire for music continued to run through his veins. The tragedy of the fateful plane crash of 1977 of the Lynyrd Skynyrd band and loss of Ronnie Van Zant brought Jimmie back to his musical roots and he then decided to make his mark in the industry, guided by the lessons he learned from his cousin Ronnie. He formed his own group and later was signed by a record label and recorded his first album, “Southern Comfort” fondly co-writing “Ronnies Song” as a tribute to his beloved cousin, which he is still demanded to play live on tour. Jimmie never looked back and continued to tour with his dedication and drive for the music, performing over 200 shows a year, delivering each performance with a vengeance.

In 2008, Jimmie released “My Name is Jimmie,” which recently became available for purchase. Currently, Jimmie and his band is working on their third album, spending a lot of time in Nashville, performing new music and working with the legendary teams of James Dean Hicks, Charlie Craig and Tommy Southern, recording cutting edge southern rock & country music. In his down time, Jimmie enjoys “being lazy,” movies, landscaping, horseback riding, fishing, go-cart racing, and spending quality time with the love of his life, his wife, Zohra.

Being cast into the shadows and branded as a “tribute band,” Jimmie continues to prove even the most cynical people wrong by standing on his own and continuing the legacy of southern rock and roll that began in the roots of his family. He will always strive to carry on his families name proudly.

With conviction Jimmie states, “I have always believed that music can change peoples’ lives and if I can do something to make someone’s life a little more enjoyable, then I feel I have done my job well. That is why I am here and that is also the reason why there is Southern Rock.”