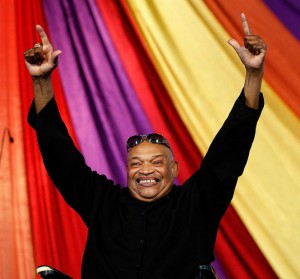 Some of you might also remember Jo as the doorman at Tipitina’s. R.I.P. my man.

NEW ORLEANS – Jo “Cool” Davis, a local gospel singer known for bringing gospel music to a broad audience through his tenure on the stage in the gospel tent at the New Orleans Jazz and Heritage Festival and Tipitina’s, passed away Friday at his Central City home after an illness. He was 63.

His wife, Evelyn, confirmed his death.

In recent years Davis, a large man with a big smile and smooth voice, was confined to a wheelchair after he lost a leg to diabetes in 2006.

A former amateur boxer, he first made his presence known in the city’s music community as a doorman and emcee for nearly 30 years at Tipitina’s, New Orleans Advocate music writer Keith Spera recalled.

“He was the guy that knew who to let in,” Spera said.

Another of Davis’ claims to fame was his introduction of gospel music into secular clubs such as Tipitina’s in the early 1980s, something that until then was nearly unheard of given gospel’s somewhat limited audience.

Davis began singing gospel at New Covenant Baptist Church in Central City when he was 10, he told an audience at Jazz Fest in 2010.

His first time performing at the popular Napoleon Avenue club happened one night when the Neville Brothers’ opening act failed to show. He opened that impromptu set with “There’s a Sweet, Sweet Spirit.”

He later shared the stage with unlikely acts such as Cowboy Mouth and rock band Fugazi, according to a biography on Tipitina’s website.

He made his first recording in 1969 when he was 16 years old and was a mainstay in the gospel tent at Jazz Fest since 1978.

Not long after he cut that first album, he met the woman who would become his wife.

Evelyn Davis recalled how the two met nearly 40 years ago when she was a bus driver whose route included St. Claude Avenue. Her husband would regularly catch her bus “and that was it,” she said.

“I am a minister, a minister of music,” Davis told his Jazz Fest audience in 2010, according to a report in The Times-Picayune. “My message is delivered in my music.”

In addition to his wife, Davis is survived by his twin brother, George, and daughter Charlene.