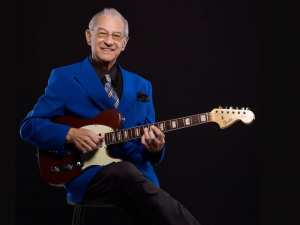 Joe Messina (December 13, 1928 – April 4, 2022) was an American guitarist. Dubbed the “white brother with soul“, he was one of the most prolific guitarists in Motown Records‘ in-house studio band, the Funk Brothers.[1]

In 1958, Motown Records founder Berry Gordy recruited Messina for his Hitsville U.S.A. studio musicians group, known as the Funk Brothers. In the 1960s and early 1970s, they recorded the instrumentals for hundreds of Motown hit records. During this time, Messina worked with performers such as Diana Ross & the Supremes, the Temptations, Marvin Gaye, the Four Tops, Stevie Wonder, and Smokey Robinson & the Miracles. Among the many Motown hits Messina played on are “Dancing in the Street“[2] (Martha & the Vandellas, 1964), “I Can’t Help Myself (Sugar Pie Honey Bunch)” (Four Tops, 1965), and “Your Precious Love” (Marvin Gaye & Tammi Terrell, 1967). Messina stopped playing guitar for 30 years after Berry Gordy took his Motown operation to Los Angeles in 1972: “I just had no interest”, he said.[3]

Messina was the creator of an alternative music technique known as The Interval Study Method, which uses the chromatic and diatonic scales to create music. He continued to reside in Detroit until his death, where he performed as a jazz musician for a number of years. On March 21, 2013, the Funk Brothers were awarded a star on the Hollywood Walk Of Fame.[4] The Funk Brothers were also the subject of the 2002 documentary Standing in the Shadows of Motown.