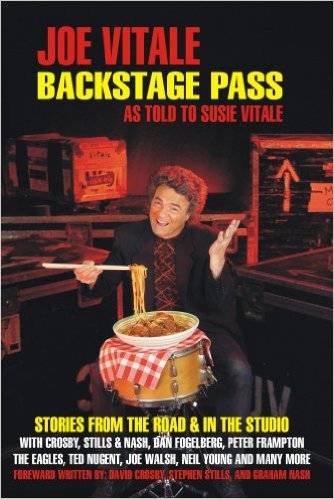 <DIV><DIV>Get a Backstage Pass for all the craziness of rock n roll! After years of hearing the comment, “”You should write a book,”” world renowned drummer Joe Vitale finally takes you backstage for a rare and intimate look behind the scenes, as told to his wife of thirty-five years, Susie Vitale. This book includes Joe s all-time favorite stories and over a hundred pages of his personal photographs. Backstage Pass is a very personal, humorous, and nostalgic history-in-stories from on the road and in the studio, spanning over forty years of his rock n roll drumming career. His stories, dating right up to 2008, include experiences with legendary performers such as Crosby, Stills and Nash, The Eagles, Dan Fogelberg, Peter Frampton, Ted Nugent, Joe Walsh, Neil Young, Ringo Starr, John Lennon, Keith Richards, Bill Wyman, Ronnie Wood, Carl Wilson, Rick Derringer, Van Morrison and many more. Vitale’s many songwriting credentials include the classic, “Rocky Mountain Way” from “The Smoker You Drink, The Player You Get” album by Joe Walsh and, “Pretty Maids All In A Row” from The Eagles album, “Hotel California.” Vitale has two solo albums and is releasing his third, “Speaking In Drums,” the summer of 2008. His son, Joe Vitale Jr.’s album, which Joe Sr. produced called, “Dancing With Shadows” will also be simultaneously released. Joe continues to tour, record, write, produce, and has no plans for slowing down. The foreword for Backstage Pass is written by David Crosby, Graham Nash, and Stephen Stills.</DIV>