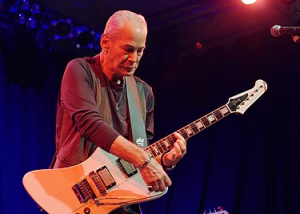 David Raskin (June 15, 1943 – August 16, 2022),[1] who performed as Kal David, was an American blues guitarist, singer and songwriter, whose 50-year musical career in Illinois, New York, and California extended through various phases, including a highly regarded stint with Columbia Records in the early 1970s.

Born in Chicago, Illinois, United States, Raskin began using the performing name “Kal David” in his late teens as the frontman of his neighborhood band, Kal David and the Exceptions, formed in 1962.[2] Its other members were Peter Cetera (bass, vocals), Denny Ebert (drums, vocals), and Marty Grebb (saxophone, keyboards, guitar, vocals).[2] Cetera later joined the Big Thing, which became Chicago, and Grebb joined the Buckinghams.[3] Around this time Kal David and the Exceptions were regular performers at the Interlude Club on Pulaski in Chicago.

Kal David left the group to sign a recording contract with King Records and, later, with Vee-Jay Records. In 1965, during his stint at Vee-Jay, he formed a new duo, The Rovin’ Kind, with guitarist Paul Cotton,[2] and the two transferred to Dunwich Records. Following a name change to Illinois Speed Press and a move to Los Angeles in 1968, the duo recorded two albums for Columbia, the self-titled Illinois Speed Press and Duet.

In the early 1970s, as Cotton joined the band Poco as its lead guitarist, David decided to leave the West Coast for the East and moved to Woodstock, the small-town/rural New York area, in the vicinity of previous year’s iconic Festival. His new group, The Fabulous Rhinestones featuring ex-Electric Flag bassist Harvey Brooks and ex-Buckinghams’ keyboard player Marty Grebb, recorded three albums: Fabulous Rhinestones, Freewheelin’ (on Paramount Records) and Rhinestones (on 20th Century Records). Friends advised him to visit a club in Woodstock and it was there that he met his future wife, vocalist Lauri Bono, who subsequently accompanied him back to Los Angeles for the next phase of their career, doing sidework for Etta James and Johnny Rivers.

In the early 1980s, David played lead guitar for John Mayall on an album which would be released a decade later. Two albums for SoulCoast Records, Never a Dull Moment and Double Tuff each met with critical acclaim and worldwide record sales coupled with numerous television appearances, including a one-hour special featuring David in Germany.

On July 14, 1998, the couple opened the Blue Guitar blues club above the Plaza Theatre in Palm Springs, which lasted six years, closing in 2004.

David and Bono continued to tour and frequently played at B.B. King‘s Blues Club in Los Angeles and the Mohegan Sun Resort and Casino in Connecticut.

David is the voice of ‘Sonny Eclipse’, a singing alien audio-animatronic, who resides at Cosmic Ray’s Starlight Cafe at the Magic Kingdom in Walt Disney World. He did another performance for Disney World at Epcot, where he performed the “Unhealthy Living Blues” for the Goofy About Health exhibit at the Wonders of Life pavilion.

In 2004, a Golden Palm Star on the Walk of Stars was dedicated to Kal David and Lauri Bono.[4]