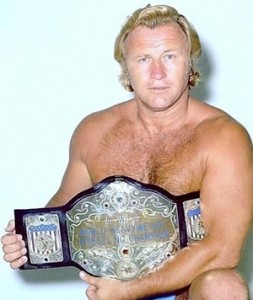 WWE is saddened to learn that WWE ‪#‎HallOfFamer‬ Nick Bockwinkel has passed away.

Nicholas Warren Francis “Nick” Bockwinkel[2] (December 6, 1934 – November 14, 2015) was an American Hall of Fame professional wrestler. He mainly competed in the American Wrestling Association (AWA) in the United States. He was a four time AWA World Heavyweight Champion and co-holder of the AWA World Tag Team Championship.

Bockwinkel was considered by his peers and many industry experts to be an excellent wrestler, known for his exceptional technical ability and in-ring psychology. He was also known for his calm, charismatic, articulate promos, which distinguished him from many of his contemporaries.

Bockwinkel began his career in 1955, after a knee injury forced the University of Oklahoma to withdraw his football scholarship. After training to become a wrestler by his father Warren,[1] a regional star in the 1940s, and Lou Thesz,[1] he spent the early years of his career teaming with his father. At the age of 16, he had his debut match against Thesz. He won his first major singles title in 1963, defeating Tony Borne for the NWA Pacific Northwest Heavyweight Championship. He also held several singles and tag team titles in Hawaii and California where he was popular.[3]

In 1970, Bockwinkel joined the American Wrestling Association (AWA), where he formed a team with wrestler Ray Stevens and manager Bobby Heenan.[1] Together, they won the AWA World Tag Team Championship three times, the first in 1972.[1] They had several defenses against The Crusher and Dick The Bruiser as well as Billy Robinson and Red Bastien. The team would eventually break up after Stevens attacked Heenan as Heenan praised himself and failed to comment on Stevens during an interview. Bockwinkel would also team with Pat Patterson on occasion.

Bockwinkel became known for his articulate wrestling interviews. “I used to use the four, five or six syllable words as best I could,” he was quoted as saying in the book The Pro Wrestling Hall of Fame: The Heels. “If I ran across one I didn’t know, I had a little dictionary. I would have this little dictionary, with 70 or 80 words, that I would always be perusing. I had it with me all the time. Automatically, some of these words just starting coming to me in my interviews because I was familiar with them.”[3]

On July 19, 1980, Bockwinkel was defeated by the very man he defeated for the title, Verne Gagne. Shortly after regaining the AWA World title, Gagne announced his retirement from professional wrestling and the AWA Heavyweight Championship was awarded back to Bockwinkel on May 19, 1981. This move infuriated wrestling fans throughout the American Wrestling Association and solidified Nick Bockwinkel as the most despised wrestler in the AWA. Away from the ring and unknown to fans Bockwinkel and Gagne were actually business partners and for awhile Nick was part owner of the AWA.

Perhaps the biggest controversy surrounding Bockwinkel and his title reign involved a series of matches with Hulk Hogan, whom Gagne signed following his firing from the World Wrestling Federation in 1981. In June 1982, Hogan defeated Bockwinkel by pinfall in St. Paul, Minnesota to capture the AWA World Title, but AWA President Stanley Blackburn reversed the decision and returned the title to Bockwinkel, who went on to lose it to Otto Wanz and regain it with Heenan`s help in the span of two months. Hogan, in the meantime, grew tired of the politics surrounding Bockwinkel and the world title and departed the AWA to return to the WWF, where he became a star and helped the company become a worldwide brand. In 1982 – 83 he would ocationally drift from the AWA territory to defend the title. Against Dick Slater in Houston. Junkyard Dog in New Orleans. Dewey Robertson in Toronto and Billy Robinson and Jumbo Tsuruta in Tokyo. In Ontario and NWA Mid Atlantic he teamed with Ric Flair.

On February 22, 1984, Jumbo Tsuruta defeated Bockwinkel to capture the AWA World Heavyweight Championship in which Terry Funk was a guest referee. Bockwinkel wrestled NWA World Champion Ric Flair for the NWA title at the last AWA show in Winnipeg, Manitoba on January 16, 1986 at the Winnipeg Arena before the AWA territory lost Winnipeg to the WWF. Bockwinkel was not the AWA champion at this time. While doing TV commentary during a match between Greg Gagne and Larry Zbyszko, Zbyszko attacked Gagne with nunchuks, When Bockwinkel tried to stop Zybszko from continuing the assault, Zbyszko knocked him out.Bockwinkel last held the title in 1987, at the age of 52. He became popular in a feud against then AWA champion Stan Hansen. When Hansen failed to appear for a title defense Bockwinkel won the title by forfeit. Hansen had quit the AWA from that point. Months later he dropped the championship to another second generation wrestler, Curt Hennig, at SuperClash. The match ended in controversial fashion due to interference by Larry Zbyszko, who had handed a roll of coins to Hennig to use on Bockwinkel. Bockwinkel retired in 1987, ending a career that spanned four decades. In one of his final matches as an active competitor, he paid Zbyszko back for costing him the AWA World title by pinning him on an episode of AWA Championship Wrestling on ESPN after knocking him out with a roll of coins.

Bockwinkel came out of retirement for one night in May 1992, wrestling old rival Billy Robinson on a UWFI show in Japan. The match has gotten some notoriety in recent times for an incident in which Robinson became legitimately upset with Bockwinkel for throwing a knee at him, and Bockwinkel audibly replying “It’s a knee, Robinson.”

After departing AWA, Bockwinkel worked as a road agent for the World Wrestling Federation, also serving as a color commentator for occasional televised events. He returned to the ring in 1993 at Slamboree: A Legends’ Reunion. The card was promoted by World Championship Wrestling (WCW) but featured veteran wrestlers from all over the country. Bockwinkel wrestled former NWA World Champion Dory Funk, Jr. to a time limit draw as part of the undercard. In 1994, Bockwinkel became the on-screen commissioner of WCW. He was reunited on the program with Bobby Heenan but their former partnership in AWA was never mentioned. [1] Away from wrestling he worked at a car dealership and in real estate.

In 2000, he and Yoshiaki Fujiwara were the commissioners for a short-lived shoot style promotion, the Japan Pro Wrestling Association, but as the shoot-style market in Japan had been low since the collapse ofUWF International, the wrestlers on it moved to other promotions. Bockwinkel was the President of the Cauliflower Alley Club until stepping down in May 2014 due to health reasons.

Bockwinkel made an appearance on WWE Monday Night Raw on March 29, 2010, as part of Legends Lumberjack match. He was a Lumberjack for the match between Christian and Ted Dibiase.

In 1968, Bockwinkel appeared as a contestant on a prime-time version of the NBC game show Hollywood Squares.[1] He played Harry in the episode Savage Sunday in the show Hawaii Five-O.[1] Bockwinkel also played a wrestler in an episode of the 1960s television series The Monkees.[1]

On July 5 1968, Nick Bockwinkel appeared as a contestant on an episode of Hollywood Squares with Peter Marshall. He lived in Las Vegas, Nevada with his second wife Darlene, who they have been married since the early 1970s. He has two daughters (from his first marriage), two grandchildren, and two great-grandchildren. On November 8, 2009, Bockwinkel underwent triple bypass heart surgery.

In 2007, he was elected President of the Cauliflower Alley Club, a non-profit organization. On Stone Cold Steve Austin‘s podcast, Ric Flair told him that Bockwinkel had Alzheimer’s disease.[4] Bockwinkle’s wife Darlene denied Flair’s claim, but did acknowledge that he had health problems which she would like to keep private[5] In May 2014, Bockwinkel stepped down from his position as Cauliflower Alley Club president due to health reasons.[6] He was replaced by former wrestler B. Brian Blair.[6]

On November 15, 2015, it was reported by the Cauliflower Alley Club that Bockwinkel had died the previous evening. The cause of death was not disclosed.[7]