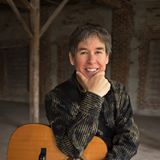 Pete Huttlinger (June 22, 1961 – January 15, 2016) was an American guitarist.[1] A graduate of Berklee College of Music, Huttlinger is a respected Nashville studio artist. In 2000, he won the National Fingerstyle Guitar Championship at the Walnut Valley Festival in Winfield, Kansas.[1] He has performed around the world with such artists as John Denver, LeAnn Rimes and many others. As a solo artist he performs across the U.S. and Europe.

Born in Washington, D.C., Huttlinger descended from two lines of prominent journalists. His grandfather on his mother’s side, Fred Walker, was an editor of the San Francisco Call-Bulletin, reporting directly to its owner and publisher, William Randolph Hearst. Huttlinger’s father, Joseph, was a White House correspondent and a publisher of his own newsletter on the oil industry. “My dad took my mom to the White House on their first date,” Huttlinger says, “and while they were walking around, President Truman came out and said, ‘Hi, Joe.’ That got Mom’s attention.”[citation needed]

By the age of 12, Huttlinger had begun music lessons and by 14 he had settled on the guitar. Soon after he graduated from high school, a relative left him a small inheritance. He decided to use this windfall to study at Berklee College of Music.[2]

During the early 1990’s, guitarist John Denver’s tour manager and producer Kris O’Connor heard Huttlinger on another project and recommended him to join Denver’s band. Huttlinger toured, recorded and performed on television with Denver from 1994 until the singer’s death in 1997.

Huttlinger has performed on numerous Grammy-winning and Grammy-nominated projects. He has also been nominated for an Emmy for music he both composed and performed for a PBS special. His performances have been used in several national TV series, including the PBS Nature special “Let This Be A Voice.” He created the theme song for ESPN’s Flyfishing America, a program on which he has made guest appearances.

As a recording artist Huttlinger has released numerous albums and received wide-acceptance ranging from his critically acclaimed Naked Pop to Things Are Looking Up. In 2009 (on Instar Records) Huttlinger released Fingerpicking Wonder: The Music of Stevie Wonder. His most current release (2013) “McGuire’s Landing” is a CD plus a short story that was written by Huttlinger.

In 2007, Huttlinger made his debut at New York City’s Carnegie Hall. He was invited back in 2008 and made his first appearance there as a solo artist. He is scheduled to perform again at Carnegie Hall on January 9, 2010.

In 2004 and 2007, he was invited to participate in both of Eric Clapton’s Crossroads Festivals. Huttlinger also makes appearances as a side-man. He toured with John Denver for many years and appears with Country/Pop superstar LeAnn Rimes, including the BBC Television’s “Live From Abbey Road,” a series taped at the famous London studios, and ABC’s “Dancing With The Stars.”

In November 2010, Huttlinger suffered a stroke, paralyzing his right side and making him lose the ability to speak. Despite his recovery, Huttlinger eventually suffered end-stage heart failure, the result of a cardiac abnormality that had plagued him since childhood. He was airlifted to the Texas Heart Institute in Houston, where he was outfitted with a heart pump known as a VAD (Ventricular Assist Device) and spent the next four months in the hospital recovering.

In 2013 he released the long-awaited McGuire’s Landing Project during a house concert on his birthday in Baltimore, Maryland.

He is a regularly featured performer with the Nashville Chamber Orchestra and has appeared with a number of other symphonies.

Huttlinger suffered a stroke on January 11, 2016 and died on January 15, 2016 at the Vanderbilt University Medical Center.[3] He resided in Nashville, Tennessee. He was married to Erin Morris-Huttlinger.[4]