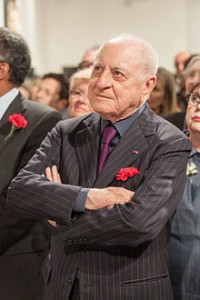 Bergé was born in Oléron (Charente-Maritime) on 14 November 1930.[2] His mother Christiane was an amateur soprano and a progressive teacher, who used the Montessori method. His father worked for the tax office and was a great rugby enthusiast. Bergé attended the Lycée Eugène Fromentin in La Rochelle, and, later, went to Paris. On the day of his arrival, as he was walking on the Champs-Élysées, French poet Jacques Prévert landed on him following a fall from his apartment window.[3][4] During these early years in Paris, Bergé befriended the young French artist Bernard Buffet and was a great help in facilitating Buffet’s success.[5][6]

Bergé met Yves Saint Laurent in 1958. They became romantically involved and together launched Yves Saint Laurent Couture House in 1961. The couple split amicably in 1976 and remained lifelong friends and business partners.[7] Bergé acted as CEO of Yves Saint Laurent Haute Couture until it closed in 2002. Highly protective of and invested in the reputation and legacy of Saint Laurent Couture, Bergé was known as the “Dean of Yves Saint Laurent”.[8] According to The New York Times, a few days before Saint Laurent died in 2008, he and Bergé were joined in a same-sex civil union known as a Pacte civil de solidarité (PACS) in France.[9] When Saint Laurent was diagnosed with brain cancer, Bergé and the doctor mutually decided that it would be better for him not to know of his impending death. Bergé said, “I have the belief that Yves would not have been strong enough to accept that.”[10]

In 1992, Bergé sold shares of the fashion house just before the company released a poor economic report. In 1996, this action was deemed to be insider trading and he was sentenced to a fine of one million Francs.[11] After the close of the Couture house, Bergé became president of the Pierre Bergé-Yves Saint Laurent Foundation.[12]

During Bergé’s eulogy of Saint Laurent, he reflected on their lifetime of memories, saying;

I remember your first collection under your name and the tears at the end. Then the years passed. Oh, how they passed quickly. The divorce was inevitable but the love never stopped.[1]

In 1988, Bergé launched the French magazine Globe, which supported the candidacy of François Mitterrand for the presidential election.[2] Bergé participated in all the campaign rallies of François Mitterrand (contrary to 1981, when he did not vote for Mitterrand).[13] Bergé later served as President of the association of the friends of Institut François-Mitterrand. In 1993, he helped to launch the magazine Globe Hebdo.

A longtime fan and patron of opera, Mitterrand appointed Bergé president of Opéra Bastille on 31 August 1988. He retired from the post in 1994, becoming honorary president of the Paris National Opera. He currently serves as president of the Médiathèque Musicale Mahler, a non-profit library with extensive collections relating to 19th and 20th century music.[5] He is also president of the Comité Jean Cocteau, and the exclusive owner of all the moral rights of all of Jean Cocteau‘s works.[14]

A supporter of gay rights, he supported the association against AIDS, Act Up-Paris, and assumed ownership of the magazine Têtu. He was also one of the shareholders of Pink TV, before withdrawing. In 1994, he participated with Line Renaud in the creation of the AIDS association Sidaction, and he became its president in 1996, a position he still holds. Sidaction is one of the main associations fighting AIDS in Europe.

In 2007, he supported the candidacy of Ségolène Royal.[16] On a more general basis, he has been considered to be her sponsor. For example, after late 2008, when she was no longer heading the French socialist party and he was paying for the rental of her political office located between the French Senate and House of Representants until this arrangement ceased on March 3, 2011.[17]

The art collection of Yves Saint Laurent and Bergé was put up for sale by the latter in February 2009, with two of twelve bronze statue heads looted from the Old Summer Palace in China during the Second Opium War among them. When China requested the return of these statues, Bergé refused and declared “I am prepared to offer this bronze head to the Chinese straight away. All they have to do is to declare they are going to apply human rights, give the Tibetans back their freedom and agree to accept the Dalai Lama on their territory.” Bergé’s self-admitted “political blackmail” was received with criticism in China.[18] After Chinese collector Cai Mingchao placed the winning bid and refused to pay on “moral and patriotic grounds,” Bergé decided to retain ownership of them. Later on in a ceremony on 29 June 2013, François Pinault (CEO Kering) returned the artifacts to the Chinese National Museum, Beijing.[19]

Bergé has also set up the museum of Berber art in Marrakesh,[20] Morocco, which holds a collection of Berber objects originating from many different parts of Morocco, from the Rif to the Sahara.[21]

Bergé published a book, Lettres à Yves, in 2010[2] which was translated into English with the title, Yves Saint Laurent: A Morrocan Passion, in September 2014.[22] On 2 November 2010, he bought a stake in Le Monde newspaper, along with investors Matthieu Pigasse and Xavier Niel.[23]

Bergé has been recognized with the Order of Orange-Nassau, Officer of the Ordre National du Mérite, Commandeur des Arts et des Lettres, and Legion of Honor.[6]

In November 2009, Pierre Bergé claimed to be suffering from myopathy. He triggered a controversy by accusing the Telethon of “parasitising the generosity of French people in a populist manner.[25]” Accused above all of not using donations immediately and making real estate investments, the French Association against Myopathies (AFM), which organises the charitable program, denies Bergé’s accusations.[26] Following the repeated attacks by the businessman, the AFM filed a complaint for defamation in February 2010.[27] On 28 June 2013, the 17th Chamber of the Paris Criminal Court sentenced him to a €1,500 fine.[28]

On 16 March 2013, on Twitter, Bergé retweeted the following message: “If a bomb explodes on the Champs Elysees because of the “#laManifPourTous”, I won’t be the one crying.” This retweet triggered strong reactions because, according to the “Manif Pour Tous” organisation, it is an incitement to acts of terrorism.[29] On 21 June, he appeared on the TV show Le Petit Journal, and mentioned this episode, declaring that he was “non-violent”.[30]

During the debate on same-sex marriage, Bergé controversially said “rent her womb for a child or lease its arms to work in a factory, what’s the difference? “, provoking an outcry by same-sex marriage supporters who go against such positions.[31]

On 26 September 2013, Bergé declared he was in favor of the removal of all Christian holidays in France.[32]