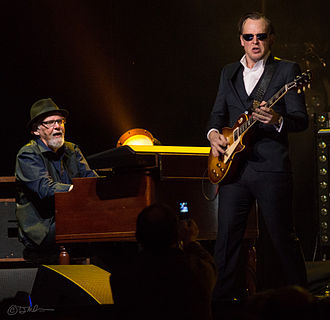 Reese Wynans is a keyboard player who has done session work and has been a member of Double Trouble[1] and progressive rock band Captain Beyond.

Reese Wynans grew up in Sarasota, Florida during the 1950s. Wynans and his six other siblings began taking piano lessons at early ages, but he was the only one who “really loved playing.” He was a tall man appearing around 2 inches taller than fellow band member Tommy Shannon who stood somewhere around 6 “4” suggesting than Wynans stood at around 6 “6” [2]

Wynans was a member of the Second Coming, which, from November 1968 to Feb 1969 also included two future and founding members of The Allman Brothers Band: guitarist Dickey Betts and bassist Berry Oakley. Wynans was involved in the initial jam session with Duane Allman, Betts, Oakley, Butch Trucks and Jaimoe that led to the formation of the Allman Brothers Band, but was eased aside in favor of vocalist Gregg Allman, as founder Duane Allman did not want two keyboardists, two guitarists and two drummers all in the same band.

In 1973 he played with Captain Beyond and was on the album Sufficiently Breathless.

Wynans also played with The Explosives along with Freddie Krc and Cam King.

Wynans joined Stevie Ray Vaughan and Double Trouble in 1985, playing keyboards on Soul to Soul and In Step. Wynans performed with the group until Vaughan’s death in 1990.

After Vaughan’s death, Wynans joined the touring bands of Joe Ely and Lee Roy Parnell. He also toured with Chris Layton and Tommy Shannon on Double Trouble’s “Been A Long Time” tour and has performed with Texas R&B-rocker Delbert McClinton.