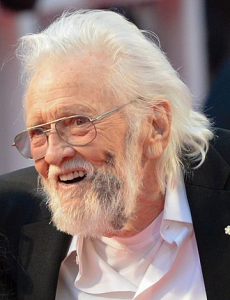 Ronald Hawkins, OC (January 10, 1935 – May 29, 2022)[1] was an American/Canadian rock and roll musician whose career spanned more than half a century. His career began in Arkansas, where he was born and raised. He found success in Ontario, Canada, and lived there for most of his life. He is considered highly influential in the establishment and evolution of rock music in Canada.[2]

Also known as “Rompin’ Ronnie”, “Mr. Dynamo”, or simply “The Hawk”, he was one of the key players in the 1960s rock scene in Toronto. Throughout his career, Hawkins performed all across North America and recorded more than twenty-five albums. His hit songs included covers of Chuck Berry‘s “Thirty Days” (entitled “Forty Days” by Hawkins) and Young Jessie‘s “Mary Lou”, a song about a “gold-digging woman“.[3] Other well-known recordings are a cover of Bo Diddley’s “Who Do You Love?” (Hawkins’ version was released without the question mark), “Hey Bo Diddley“, and “Susie Q“, which was written by his cousin, rockabilly artist Dale Hawkins.

Hawkins was also notable for his role as a talent scout and mentor of musicians he recruited for his band the Hawks. Roy Buchanan was an early Hawks guitarist on the song “Who Do You Love”. The most successful example of this were the musicians who left him to form The Band. Other musicians Hawkins had recruited went on to form Robbie Lane and the Disciples,[4] Janis Joplin‘s Full Tilt Boogie Band,[5] Crowbar, Bearfoot, and Skylark.

Hawkins was born on January 10, 1935, in Huntsville, Arkansas, two days after the birth of Elvis Presley. When he was nine years old, his family moved to nearby Fayetteville, Arkansas. After graduating from high school, he studied physical education at the University of Arkansas, where he formed his first band, the Hawks. He toured with them throughout Arkansas, Oklahoma and Missouri. Hawkins also owned and operated the Rockwood Club in Fayetteville, where some of rock and roll‘s earliest pioneers came to play including Jerry Lee Lewis, Carl Perkins, Roy Orbison and Conway Twitty.

On advice from Twitty,[5] Hawkins began touring Canada in 1958. His first gig there was at the Golden Rail Tavern in Hamilton, Ontario, where he became an overnight success. Hawkins decided to move to Canada, and in 1964 became a permanent resident, eventually making Peterborough, Ontario area, his home in 1970.[5] Hawkins moved from their Stoney Lake Manor in Douro-Dummer after selling in 2017 to live in Peterborough.[6]

After the move, the Hawks, with the exception of Hawkins and drummer Levon Helm, dropped out of the band. Their vacancies were filled by Canadians Robbie Robertson, Rick Danko, Richard Manuel and Garth Hudson, all hailing from Southwestern Ontario. Helm and the rest of those Hawks would leave Hawkins in 1964 to form an act of their own, which eventually came to be named The Band.

In the early 1970s, Hawkins noticed guitarist Pat Travers performing in Ontario nightclubs and was so impressed with the young musician that he invited him to join his band. Travers later had a very successful recording career and became one of the most influential guitarists of the 1970s hard rock genre.

In 1975, Dylan cast Hawkins to play the role of “Bob Dylan” in the movie, Renaldo and Clara.[7] The following year he was a featured performer at the Band’s Thanksgiving Day farewell concert, which was documented in the 1978 film The Last Waltz.[8] His 1984 LP, Making It Again, garnered him a Juno Award as Canada’s best Country Male Vocalist. In addition to his music, he has also become an accomplished actor, hosting his own television show Honky Tonk in the early 1980s and appearing in such films as Heaven’s Gate with his friend Kris Kristofferson, Hello Mary Lou: Prom Night II and Snake Eater.

On January 10, 1995, Hawkins celebrated his 60th birthday by throwing a concert at Massey Hall in Toronto, which was documented on the album Let It Rock. The concert featured performances by Hawkins, Carl Perkins, Jerry Lee Lewis, the Band and Larry Gowan. Jeff Healey sat in on guitar for most, if not all, of the performances. Hawkins’s band, the Hawks, or permutations of it, backed most, if not all, of the acts. All of the musicians performing that night were collectively dubbed “the Rock ‘n’ Roll Orchestra”.[citation needed]

In 2002, October 4 was declared “Ronnie Hawkins Day” by the city of Toronto as he was inducted into Canada’s Walk of Fame, in recognition of his lifetime contribution to music and his generous support of the Schizophrenia Society of Ontario and other charitable organizations. Hawkins was inducted into the Canadian Music Industry Hall of Fame at the Canadian Music Industry Awards on March 4, 2004. His pioneering contribution to the genre was also recognized by the Rockabilly Hall of Fame.

In later years, Hawkins developed pancreatic cancer. His state of health, attributed to everything from psychic healers to native herbal medicine,[9] was featured in the 2012 film Ronnie Hawkins: Still Alive and Kicking.[10]

In 2005, he was awarded an honorary degree from Laurentian University. On May 2, 2013, Hawkins was made an Honorary Officer of the Order of Canada. He was invested on May 7, 2014. The citation read:

For his contributions to the development of the music industry in Canada, as a rock and roll musician, and for his support of charitable causes. For more than 50 years, musician Ronnie Hawkins has demonstrated a strong devotion to Canada’s music industry. Often referred to as the “father of Canadian rock n’ roll”, he was a key player in the 1960s rock scene, with his band The Hawks serving as a launching pad for a host of Canadian musicians. In addition to producing scores of singles and albums, he has performed in support of many charitable causes, notably the Peterborough Flood Relief and the Schizophrenia Society of Ontario.[11]

Hawkins later reissued most of his albums on CD through Unidisc Music Inc.[citation needed]