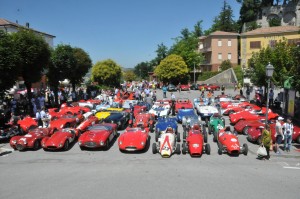 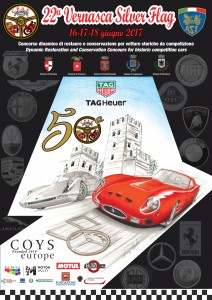 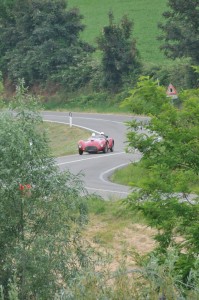 This year’s Vernasca Silver Flag Hill Climb in Northern Italy is throwing open its track to welcome “the most beautiful cars in the world” on 16-18th June.

“Rather than concentrating on a specific marque, we wanted to celebrate people’s passion and aspirations and allow everyone to bring the car of their dreams”, said organiser Claudio Cassali. “So this year, the theme of Vernasca Silver Flag is US! The fanatics and dreamers who check their pockets and who have finally managed to realise their dreams, whether we are talking about cars worth millions or a few thousand Euros.”

He added: “The Club Piacentino Auto d’Epoca (CPAE) is calling for all those who have made their dreams come true to bring ‘the most beautiful’ cars to Castell’Arquato and welcome all those who continue to dream of one day being at Vernasca Silver Flag, Goodwood, Montecarlo or Nurburgring with the numbers in their hand, ready to stick them on the doors of their very own dream car!

The preparation for this year’s Vernasca Silver Flag started with a live painting contest held on the morning of Saturday 28th January at the hall of the Chamber of Commerce Palace in the centre of the city of Piacenza, with the teachers and students from the Liceo Artistico Cassinari high school specialising in art taking part.

Seven cars were posed for the art students, who painted their interpretation of the relationship between cars, passion and designs. A specially chosen panel then selected the best painting, which has become this year’s lead image of the event.

All kinds of classic racing cars were represented by the seven gorgeous models brought by the CPAE: Touring cars with a Fiat Abarth 1000 Radiale; Gran Turismo with a Ferrari 212 Berlinetta that raced at Le Mans and Mille Miglia; Grand Prix with a Maserati 6 CM; an Abarth 2000 SP that remembered the hill climb races of the 60s; sport cars from the 50s with a Porsche 550; F1 with a Cooper BRM; pre-war with a Balilla Coppa d’oro; and, finally, a fantastic Lancia Delta S4 Ex-Works for the rallies of the ’80s.”

In the afternoon all the paintings were put on display in Piazza Cavalli together with the racing cars.

Chris Routledge, CEO of international auctioneers COYS, who have sponsored the event for many years, said: “This year looks like another spectacular event with the organisers throwing it open to all those people who have had a dream and then brought it to fruition. We see it all the time where people buy a car and then put it back together so that they can compete in an event such as this.

He added: “Recongising and celebrating this passion is fantastic and extremely important, and I know that anyone who wants to bring their car to Vernasca will get a tremendous welcome. This is one of the best-unspoilt events worldwide.”

###
For further information, please contact:
David Barzilay – t: +44 (0) 207 544 8980 | m: +44 (0) 7860 322 333 | e: david@barzilay.co.uk
Julian Menendez – t: +44 (0) 207 544 8831 | m: +44 (0) 7838 547 531 | e: julian@barzilay.co.uk
About Vernasca Silver Flag
As usual the event is open to pre-1975 important racing cars and takes place at Castell’Arquato, one of northern Italy’s most beautiful and picturesque medieval towns situated 120km south of Milan in the Emilia region, a country famous also for food and “bonne vivre…” The hill climb will be run on the original 9km course with three demonstration runs over the weekend. Thanks to the splendid setting the proven organization, and the friendly hospitality, the event attracts participants from around the World.The event begins early on Friday afternoon: the paddock will be open to welcome collectors’ cars and scrutineering. The sign-on process continues on Saturday morning until 10.30hs, when the first group of cars will officially open the “Dynamic restoration and conservation concourse for competition cars”, better known as the Vernasca Silver Flag.

Roads will be closed to normal traffic and the cars will begin the 9km run up to Vernasca. Vehicles will be divided into the traditional hill climb groups, by types of participants: touring, GT, sports cars up to 1961, prototype sport cars, front engine single-seaters, rear Engine single-seaters, pre-war period cars.

The second group will assemble in the afternoon at 15.30, thus ending the “sporty part” of the day.

During the evening, the “elegant” part begins, which is one of the most eagerly awaited moments of the weekend by many.  Dinner takes place in Castell’Arquato’s main square, an architectural gem considered to be one of the most beautiful amongst Medieval Italian piazzas. On Sunday, engines run again in Val d’Arda, when the last hill climb will take place at 10.30am.

A final buffet will be held in Vernasca, followed by the “Concourse” prize giving.

VERNASCA SILVER FLAG CLASSIC TRACK DAY | Friday 16 June
For the second year, the Silver Flag will have an important preview on the circuit of Varano de Melegari for fans and participants who want to try their cars on the track before the hill climb. The “Vernasca Silver Flag Classic Track Day” will be divided into non-competitive free track sessions without a safety car. There are four sessions of approximately 15 minutes each. The various classes will be decided after registration has closed, but they will be based on the power of the cars.