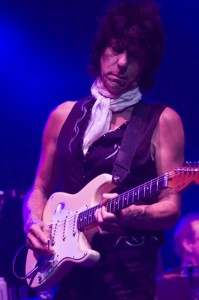 … (Los Angeles, CA – November 10, 2011) On Wednesday, the 9th of November, Jeff Beck received the Living Legend Award at the 2011 Classic Rock Awards in London, England. The Award was presented to Beck by Roger Taylor of Queen.

Rhonda has been touring with Jeff throughout the 2-year, worldwide “Emotion & Commotion” tour and is one of music’s great undiscovered treasures. Previously, Rhonda has worked with a host of artists including Prince, Beyonce, Justin Timberlake and Little Richard to name a few. In addition, Rhonda has made genre defining solo records also employing her unique vocal talents. As a vocalist, the pearly tone songstress is lyrically sophisticated with emotional depth that is both admirable and technically brilliant. As a musician, Rhonda has sparked several genres of music including smooth jazz/funk and electrified funk/rock, which only touch the tip of her creative abilities.

Beck discovered Veronica’s drumming talents on YouTube, when he was searching for “something different,” and contacted her right away. Veronica has been on the rise as one of the industry’s hottest, young drummer/songwriters. Most recently, she has been working with Beck for his new studio album and is credited as a co-writer with the legendary DMC. Veronica found a national spotlight in The Game’s “Red Nation” video, has worked directly with LL Cool J as a member of his signed band, 13, and conquered dozens of stages with drum-icon, Carmine Appice and his SLAMM group.

During a live performance at the ceremony, Beck was joined on stage by good friend, Chrissie Hynde on the song “Stand By Me” and Joss Stone for the song “I Put A Spell On You” from his Grammy-Award winning studio album, Emotion & Commotion.

Beck is returning to the studio this week to begin work on his next album, due out early 2012.