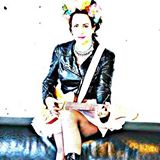 Honesty is a quality getting rarer and rarer in rock and roll, but you can see, hear and believe it in Courtney Yasmineh. The Chicago/NYC/Minneapolis singer, guitarist, songwriter draws from a poisoned well that runs deep; harsh reflection, brutal frankness, bittersweet inspiration, brief flights of sexual fantasy and blistering romance, but most of all, transcendent saving graces.

Imagine a songsmithing family of not-so-evil stylistic sisters comprised of Lucinda Williams, Liz Phair, Alanis Morrisette. Now imagine Courtney as Cinderella in that fairtytale musical equation … and leaving the ball on her own terms.

Although she’s been writing songs and performing for virtually her entire adult life, it’s only in the past decade that she’s begun to record and release albums and EPs – 7 in all, including two in 2015; Red Letter Day and Red Letter Day Unplugged (released in April and September, respectively). Garnering more acclaim and building a bigger following with each consecutive release and tour, these two new releases have brought a whole new level of national radio exposure.

What makes her body of work so enthralling is the way she subtly weaves her personal narrative into immediately memorable songs whose appeal spans a wide range of ages and musical tastes.

Sans booking agents, managers and a stretchable budget Yasmineh has successfully booked nearly a dozen European tours, logged countless jaunts across the US, shot many music videos, and garnered local and national media attention here and abroad. Her live performances showcase her prowess as a bandleader, and front woman; she’s sexy, smart and somehow simultaneously shy and brazen, beckoning the audience to join her for the ride.

Courtney Yasmineh isn’t necessarily a rulebreaker, she just plays by her own rules. From skipping town out of Chicago as a teenager and holing up in a cabin in northern Minnesota, where she focused an obsession with Bob Dylan into the beginnings of her craft as a songwriter, guitarist and singer, to self-releasing six albums and several EPs, and doing nine (and counting) tours of Europe and a half-dozen in the US (all self-booked, no less), she is simply unstoppable. With each album she’s continued to expand her musical universe, stretching across the spectrum from indie pop to alt-country to full-tilt rock and roll, all the while writing better and better genuinely smart songs that are deeply personal yet touch on subjects and feelings everyone can relate to.

Her Red Letter Day Unplugged EP, came about in the most organic and unexpected fashion. When Courtney was preparing for a set of East Coast radio station appearances and gigs at relatively intimate venues to promote Red Letter Day – the early 2015 CD that is her most electric, straight-up rock and roll album to date – it became apparent that bringing her regular backing band to the relatively tiny spaces most radio stations have for performances would be a logistical (and potentially sonic) nightmare. Ever enterprising and unafraid to wade into uncharted waters, Courtney and her drummer/longtime collaborator/musical director Rob Genadek began rehearsing all-new, stripped down acoustic arrangements of the songs on Red Letter Day as a duo. Reaction to these new versions of the songs was immediate and overwhelmingly positive from all sides; DJs loved them, audiences loved them, and even her bandmates sitting on the sidelines back in Minneapolis couldn’t help but acknowledge the way these gems had taken on a whole new polish and were shining brighter than ever. Seizing the moment, Courtney and Rob went back in the studio and recorded these new versions of five of the album’s songs. The resulting EP has been hailed as her ‘breakthrough’ release and has been receiving international radio airplay and excellent reviews.

Her newest studio album is slated for a 2017 release and already has gathered industry buzz in no small part because the great Michael Baker, drummer and musical director to Whitney Houston and later to Annie Lenox, has anointed the project with his presence as kingpin drummer to the studio band. Adding Jim Anton, and Omid Huttar, plus Rob Genadek as producer, the new tracks are uncompromising rock and roll drawing from the iconic past, summoning great players and geat performances from the living and the dead. Courtney’s new writing channels the spirit of sixty years of rock and roll from London to New York, Muscle Shoals to Philadelphia. The sound is familiar, visceral, muscular, fresh, highly energized. Courtney has been quoted recently saying she’s now been a songwriter for forty five years. Her time has arrived.