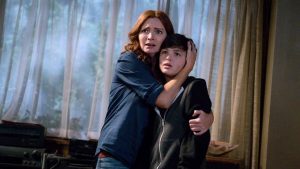 Logan Williams (April 9, 2003 – April 2, 2020) was a Canadian actor best known for playing the young Barry Allen on the television show The Flash.

Williams was born on April 9, 2003[1] in Vancouver, Canada, and raised in the nearby city of Coquitlam.[2] He was an only child and had no cousins.[3] The Tri-City News reported that he attended the Terry Fox Secondary School in the Port Coquitlam area.[4] His first role was at the age of 10 in the 2014 Hallmark TV movie The Color of Rain.[2][3]

From 2014–15, Williams portrayed the younger version of Grant Gustin‘s Barry Allen on The CW‘s The Flash, starring in eight episodes across the first two seasons. Gustin noted that he was “impressed by not only Logan’s talent, but his professionalism on set”.[5] Another co-star, John Wesley Shipp, said that Williams “was 100% committed to playing” his part, and was liked on set.[5] Williams, a member of SAG-AFTRA,[5] also played Miles Montgomery on When Calls the Heart for thirteen episodes from 2014–16,[6] and Max Johnson on Supernatural.[5] He also appeared in The Whispers.[2]

He won and was nominated for several acting awards,[4] including multiple Joeys.[7][8] For his role as Barry Allen he won the 2015 Joey Award for ‘Best Actor in a TV Drama Recurring Role 8–12 Years’.[9] He was also nominated for Best Newcomer at the 2015 UBCP/ACTRA Awards.[1]

Williams died on April 2, 2020, at the age of 16.[5] The cause of death was not initially made public.[2] In a social media tribute, Gustin wrote that the news was “devastating”, and described Williams’ passing as being sudden, also referring to the “strange and trying time” they were experiencing.[10] His When Calls the Heart co-star Erin Krakow posted a tribute saying she was “heartbroken”.[10]

His death was reported to Canadian media by his mother, who also said that the family could not grieve together because of social distancing rules in effect during the COVID-19 pandemic.[6] According to reports, his grandparents, parents, aunts and uncles all survive him.[11][1]