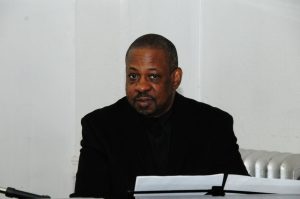 In 1971, Leroy Kirkland introduced Onaje to the Detroit guitarist Kenny Burrell, to whom Onaje gave a demo tape. The following day, Onaje received a call to play with Burrell at Baker’s Keyboard Lounge in Detroit. This work led to further performances with major jazz musicians such as bassist Larry Ridley as well as The Thad Jones/ Mel Lewis Orchestra. During those early 1970s, Onaje replaced Nat Adderley, Jr. in a contemporary jazz ensemble called Natural Essence. At that time in the course of two years, some of the personnel of this group included drummer Buddy Williams, bassist Alex Blake, trombonist Earl McIntyre and on percussion, T. S. Monk.

Gumbs adopted the name Onaje in the early 1970s; it means “the sensitive one”.[3]

“His association with the New School for Jazz and Contemporary Music in New York and his work with the Litchfield Jazz Camp in New Milford, Conn., allow him to expand his vision and shape young minds.”[3]

On January 24, 2010, Onaje suffered a stroke. Miraculously, he stayed in the hospital for only two days. By December of that same year, an album was released in Japan entitled Just Like Yesterday. On this CD Onaje was accompanied by Omar Hakim, Victor Bailey, Marcus McLaurine, William S. Patterson and Chuggy Carter. Any visible signs of the stroke had since vanished. In February 2015, Onaje suffered another medical setback. Although he was hospitalized for two weeks, he recovered and was able to return to work doing what he does best, composing, arranging and playing piano.