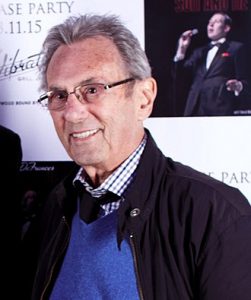 Schmitt grew up in New York City and lived in Brooklyn til the late 1940s. He bought his first 78 at the age of 10, Jimmie Lunceford‘s record “White Heat.” Schmitt’s favorite band was Jimmie Lunceford & His Orchestra.[1] He had a younger sister and two younger brothers (Richy and Russ), both of who became audio engineers. His family was poor so some Saturdays he worked at a shop doing shoe repairs.[2]

On the weekends, Schmitt would spend time at his uncle’s recording studio, Harry Smith Recording (Smith had changed his name from “Schmitt” to “Smith” because of the anti-German sentiment of the era.[2]) From the age of 8, Schmitt would ride the subway himself from Brooklyn to Manhattan to go to the studio.

Smith’s studio was the first independent recording studio on the East Coast. engineered sessions for Brunswick Records including with Bing Crosby, and the Andrew Sisters. Smith was his father’s brother and also Schmitt’s godfather. Schmitt considers Smith one of his mentors for recording along with Tom Dowd.[1]

Smith was friends with Les Paul, who became “like another uncle” to Schmitt. Schmitt and Paul remained friends for life.[2]

After serving in the U.S. Navy, he began working at Apex Recording Studios at the age of 19 as an apprentice. He got the job based on a recommendation from his uncle. His job was primarily assisting on engineer Tom Dowd‘s recording sessions. After a few months, he was engineering small demo recordings (mono recordings at 78 rpm)[2]

On a Saturday afternoon, Schmitt’s had a recording session with Duke Ellington and his Orchestra – not the small demo recording he was expecting to do.[3] Schmitt was the only one at the studio and couldn’t get the owner or engineer Tom Dowd on the phone so he did the session himself. Schmitt said he told Ellington many times, “Mr. Ellington, I’m not qualified to do this”. Ellington responded by patting him on the leg, looking him in the eye and saying, “It’s okay sonny, we are going to get through this”.[1] They cut three songs in four hours.[2]

He worked at Apex for two years until it closed.

When Apex closed, he moved to Nola Studios for a year (Tom Dowd told him of the opening) then worked at Fulton Recording. At Fulton, he worked with engineer Bob Doherty who taught him how to mix large orchestras.

In 1958, Schmitt moved to Los Angeles and became a staff engineer at Radio Recorders on Santa Monica Blvd in Hollywood.

In 1963 he moved to RCA in Hollywood as a staff engineer,[4] the first engineer hired for the studio.[1] While at RCA he engineered albums for Henry Mancini, Cal Tjader, Al Hirt, Rosemary Clooney, Liverpool Five, The Astronauts, Sam Cooke (“Bring It On Home to Me,” “Cupid,” “Another Saturday Night“) in 1961. He also did a lot of motion picture scoring work for Alex North and Elmer Bernstein. In addition, Schmitt worked with Jascha Heifetz‘s “Million Dollar Trio”, which comprised Heifetz himself, Arthur Rubinstein on the piano, and Gregor Piatigorsky or Emanuel Feuermann on cello. Schmitt once stated that “Mr. Heifetz was very temperamental in the Studio.” He has also stated that Heifetz would have angry fits during recording sessions. Schmitt also engineered the recording sessions held at RCA Hollywood for Elvis Presley‘s first post-army motion picture for Paramount Pictures, titled G.I. Blues. These recording sessions were held on 27–28 April 1960.

From the mid-60s to present[edit]

Other career highlights include engineering both Frank Sinatra Duets albums, Ray Charles‘ Genius Loves Company and some of Diana Krall‘s albums. Much of his work in the last few years has been with producer Tommy LiPuma. He has also recorded Sammy Davis, Jr., Natalie Cole, Thelonious Monk, Elvis Presley, Tony Bennett, Madonna, Michael Jackson, and many others.

He also worked on the iconic Samsung‘s Over the horizon theme of 2015 as an recording/mixing engineer.

Since he moved to Hollywood, Schmitt has almost exclusively worked at Capitol Studios, with occasional sessions at United Recording Studios and EastWest Studios, formerly Western Recording. He made an advertisement for AMS Neve‘s 88R console at Capitol’s Studio A, which currently holds an 88R.[6]

Schmitt has also appeared on the online internet television series “Pensado’s Place”, hosted by Dave Pensado and Herb Trawick. During one of the segments he mentioned that his favorite microphone is the Neumann U 67 tube (valve) condenser microphone, and explained that he uses the microphone on numerous sources.[7]

During his career, Schmitt has recorded and mixed more than 150 gold and platinum albums.[8]

He has won more Grammy Awards than any other engineer or mixer. He was the first person to win both the Grammy and Latin Grammy for Album of the Year. He won his first Grammy in 1963 for engineering the Hatari! soundtrack by Henry Mancini. The song “Moon River” and its associated album won two Grammy awards in 1961 as well as an Academy Award for Best Song with its appearance in the film Breakfast at Tiffany’s. He was awarded two Latin Grammy Awards in 2000 including Album of the Year. In 2005 he won five Grammys for his work on Ray Charles‘ Genius Loves Company, including Album of the Year, setting the record for most Grammys won by an engineer or mixer in one night. In 2006, he was given the Grammy Trustees Lifetime Achievement Award.

In 2014, Schmitt was awarded a star on the Hollywood Walk of Fame.[9] The star recognizes his contribution to the music industry and is located at 1750 N. Vine Street.[10][11]

Don Was, Joe Walsh, and President/CEO of the Hollywood Chamber of Commerce, Leron Gubler were speakers at Schmitt’s Star Unveiling Ceremony.[12] Gubler declared that 13 August would be designated ‘Al Schmitt Day’ in Hollywood. Although Natalie Cole and Paul McCartney were unable to attend the ceremony, both released statements that were read by Gubler at the ceremony.

In June 2014, he won the Pensado Giant Award.[13] In September 2014, he received an honorary doctorate from the Berklee College of Music.[14]