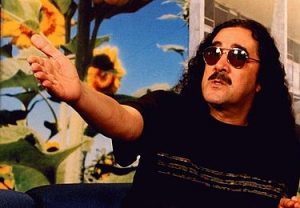 Antônio Carlos Moraes Pires (born July 8, 1947, Ituaçu, Brazil), better known as Moraes Moreira, is a Brazilian guitar player and singer.[1] During the 1970s he played guitar and sang in the band Os Novos Baianos.[2] After playing in Os Novos Baianos, Moreira embarked on a solo career where he recorded 29 albums.[3] Moreira has been involved in recording 40 full-length albums between Os Novos Baianos, Trio Elétrico Dodô e Osmar, and two more albums with guitarist Pepeu Gomes. Moreira is considered one of the most versatile composers of Brazil, mixing the genres of rock, samba, choro, frevo, baião, and classical.

Moreira began playing accordion in festivals at São João and other events in Ituaçu, Brazil such as “Portal da Chapada Diamantina”. In his youth he learned to play the classical guitar while taking a science class in Caculé, Bahia, Brazil. He moved to Salvador and there met Tom Zé, and was also introduced to rock music. On meeting Baby Consuelo, Pepeu Gomes, Paulinho Boca de Cantor, and Luiz Galvão, they formed the band os Novos Baianos, and were active from 1969 until 1975. Together with Pepeu Gomes, he composed almost all of the songs of the group. The album Acabou Chorare, released by the band in 1972, has been ranked by Rolling Stone Brasil as the greatest Brazilian music album of all time.[4]

Moraes began his solo career in 1975, and has since then recorded more than 20 albums. In his solo career, he was the lead singer in the trio Trio de Dodô e Osmar, and recorded many popular songs associated with Carnval, in what was conventionally called “frevo trieletrizado”. Some of the hits during this part of his career include, Pombo Correio, Vassourinha Elétrica, and Bloco do Prazer.

During the 1980s he distanced himself from the Bahian Carnaval due to increasing commercialization from tourism. In 1994 he recorded Brasil Tem Concerto (Brazil’s Concert) which was influenced by classical music, and in the following year appeared in the MTV special “Moraes Moreira Acústico MTV” which was later released as a CD and DVD. In 1997 he recorded Carvalesco which commemorated his 50th birthday, and 50 Carnavals. Two years later, he recorded 500 Sambas em homenagem aos 500 anos de descobrimento do Brasil which focused on samba music.

In the year 2000, he released the album, “Bahião com H”, playing baião music with characteristic Bahian rhythms. In 2003, he completed a trilogy that had a Brazilian theme which included the three albums Lá Vem o Brasil Descendo a Ladeira (1979), O Brasil Tem Concerto (1994,) and Meu Nome é Brasil (2003). In 2005, he independently surprisingly released the album De repente, which mixed hip hop with Northeastern Brazilian influences and included his characteristic classical guitar swing rhythms. He published the book, A historia dos Novos Baianos e outros versos (The History of the Novos Baianos and other verses), in which he told the history of the group in a chapbook and interesting aspects of his solo career. The book resulted in a Brazilian tour of the same name where he played the major hits of his career and recited passages from the book. In 2009, it was released as a DVD and CD. In 2012, he recorded the album A Revolta dos Ritmos, a compilation of 12 of his unedited recordings.