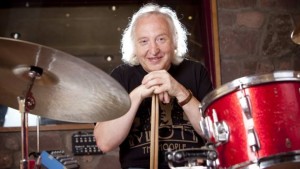 Born in Ross-on-Wye, Herefordshire, Griffin attended Ross-on-Wye Grammar School. He played in local bands with future fellow Mott the Hoople member Overend Wattsand it was during this time he gained the nickname “Buffin”. Griffin’s bands during this time included the Silence and the Charles Kingsley Creation. He appeared on two singles in 1966 by Yemm and the Yemen. Also in 1966, again with Watts and also with Mick Ralphs, Griffin played in the Doc Thomas Group. Successful in Italy, the group performed until the summer of 1968 when further changes of band personnel took place. Organist Verden Allen was added and the group changed its name to the Shakedown Sound and then to Silence. In 1969 they moved to London and with the addition of Ian Hunter, in June 1969 Mott The Hoople were formed.[1]

Following the departure of Ian Hunter and Mick Ronson, Griffin, along with Overend Watts and Morgan Fisher formed Mott with guitarist Ray Major and vocalist Nigel Benjamin. Following the departure of Benjamin in 1976 the remaining members regrouped as British Lions, with former Medicine Head member and songwriter John Fiddler, until their demise around 1978. During the 1980s, Griffin produced albums for Hanoi Rocks and The Cult, and the Department S hit, ‘Is Vic There?‘, among others (such as New Model Army).

Griffin (right) with Mott the Hoople in 2009

Aged 58, Griffin was diagnosed with Alzheimer’s disease.[2] In January 2009 it was confirmed that Griffin and the other original members of Mott the Hoople would reform for three 40th anniversary reunion concerts in October 2009.[3] Due to popular demand, the reunion was eventually extended to five shows. Having been diagnosed with Alzheimer’s disease,[4] Griffin only performed during the encores. The Pretenders drummer Martin Chambers, a fellow Herefordshire native and friend of the band, played the main set and also covered for Griffin on the 2013 tour.