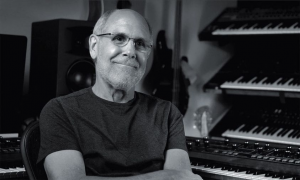 Dave Smith (born August 19, 1949 in Salisbury, Wiltshire, England) is an English composer, arranger and musical performer. Since 1971 he has been associated with the English school of experimental music.

After attending Solihull School, he read music at Magdalene College, Cambridge. In the 1970s, Smith was a member of the Scratch Orchestra and a participant in several composer/performer ensembles. The first of these was a keyboard duo with John Lewis which played minimalist and systemic works by British and American composers (notably including early works by Philip Glass) as well as by themselves. Several concerts with Michael Parsons and Howard Skempton featured at this time, as did a short-lived five-piano group (with Lewis, Michael Nyman, Orlando Gough and Benedict Mason) and an involvement with the People’s Liberation Music group of Laurie Scott Baker, Cornelius Cardew and others. From 1977 he played in John White‘s Garden Furniture Music Ensemble alongside Mason and Gavin Bryars: his close association with the music of White, Bryars and Cardew has continued ever since. In the 1980s he was a founder-member of the English Gamelan Orchestra and Liria, the first British groups to specialise in, respectively, Javanese classical and Albanian folk musics.

Up to 1977 his music was largely minimalist (process music or systems music). His style quickly developed into a highly eclectic pool of ideas ranging musically from the abstract to the markedly referential and which on occasion is informed by a political consciousness and commitment reminiscent of the later Cardew. His acknowledged “influences” range from Alkan, Ives and Szymanowski to Albanian folk music, Duke Ellington, Tom Dissevelt and those with whom he has worked. The range of ideas is most clearly chronicled in a series of recital-length solo Piano Concerts, works which encompass an entire concert with varieties of styles. Many of his piano works have been encouraged and performed by John Tilbury.

Smith has taught at Finchley Catholic High School (1971–73), Kingsway-Princeton College (1973–84), De Montfort University (1980–97) and the University of Hertfordshire (1997–2021). His work with students has resulted in a large number of arrangements, particularly for tuned percussion groups, as well as performing versions of Grainger’s Random Round, Reich’s Music for 18 Musicians and several works by Carla Bley. Other arrangements include a solo piano version of Holst’s The Planets and reductions for violin and piano of a number of Albanian works for violin and orchestra. He is a member of CoMA (Contemporary Music-making for All) for whom he has composed works for large, flexible ensembles such as Murdoch or Fred West – which is best? Reconsidered (2000), and Whiskies of Islay (2006).