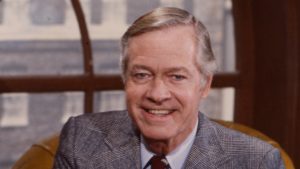 Compton was born in 1925 in Reading, Pennsylvania. His father sold aluminum pots and pans and worked at a local steel mill. After high school, Compton fought in the 103rd Infantry Division during World War II. When the war ended, Compton attended Swarthmore College, where he initially studied pre-law and Political Science but later switched to English.[1] Compton also began acting school theatre productions. After graduating from Swarthmore, Compton earned a Master of Fine Arts from the Yale School of Drama, where he befriended Paul Newman.[2]

Compton was known for portraying attorney Mike Karr, the central character on the long-running soap opera The Edge of Night, on which he appeared from 1970–1984, and stern but fair battalion commander Lieutenant Colonel Edward Gray on the 1960s sitcom Gomer Pyle, USMC. He had a recurring role in 1959–1960 in the NBC series The Troubleshooters with Keenan Wynn, Bob Mathias, and Chet Allen. His other television credits include The Twilight Zone, 77 Sunset Strip, My Three Sons, Mayberry RFD, Mannix, Hogan’s Heroes, That Girl, Another World, Loving, One Life to Live, As the World Turns and Ed. He also portrayed President Flynn in the 1991 Christopher Walken film McBain.