It’s only Wednesday but we’re already getting primed for the final return of Skynyrd to Hollywood Casino Amp. Friday night with an early start time of 6 for this major night of music. Also including 38 Special, Marshall Tucker and Jamey Johnson. Tucker’s first album was an early purchase of mine with the next one soon after. The Caldwell brothers are long gone RIP but I did get a chance to interview Toy on the radio in Champaign. Original singer Doug Gray carries on. 38 Special was co-founded by Donnie Van Zant, Ronnie and Johnny’s brother; original member and singer Don Barnes leads the current lineup with all those hits, most of them co-authored by our resident Chicago songsmith Jim Peterik. And then there’s singer Jamey Johnson, a great country artist who rates up there with Chris Stapleton in terms of ability. Jamey was last heard in concert here at the Chicago Theatre with Warren Haynes and their tribute to The Band’s Last Waltz with Garth Hudson and Taj Mahal. It’s the Last of the Street Survivors Farewell Tour Friday and there’s still tickets available. Have to admit I don’t totally get that when I see some of the other stuff passing for music that sells out these days. The weather should be fine enough, the parking is free in Tinley and the locals are nice. What’s not to like, people? Getting out the boots and cowboy hat for the first time this summer LOL. Rock it out.

At this time, we have no information on how serious the attack was.

This isn’t the first time one of the band member’s had a heart incident. 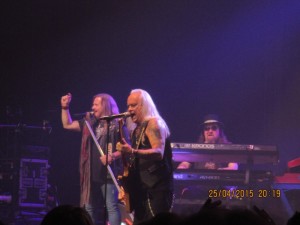