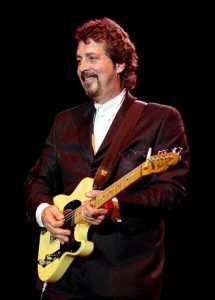 Michael Stanley Gee (March 25, 1948 – March 5, 2021) was an American singer-songwriter, musician, and radio personality. Both as a solo artist and with the Michael Stanley Band (MSB), his brand of heartland rock was popular in Cleveland, Ohio and around the American Midwest in the 1970s and 1980s.

Michael Stanley Gee graduated from Rocky River High School[1] in 1966. He attended Hiram College[1] on a baseball scholarship and graduated with a bachelor’s degree in 1970.

While in college, Michael Stanley was in the band Silk which released an album, Smooth As Raw Silk, on ABC Records in 1969.[2]

While working as a regional manager for a record store chain, he released his first solo album, Michael Stanley, in 1973. The album and its follow-up Friends & Legends were produced by Bill Szymczyk and featured contributions from Joe Walsh, Todd Rundgren and David Sanborn.

The Michael Stanley Band was formed by Stanley in 1974 with singer-songwriter–lead guitarist Jonah Koslen, former Glass Harp bassist Daniel Pecchio and drummer Tommy Dobeck from the band Circus. There were several personnel changes over the years and by 1982 the group had evolved into a seven-piece band.

The group reached the peak of their popularity nationally in 1981 when the single “He Can’t Love You” from the album Heartland (written and sung by keyboardist Kevin Raleigh) made the Top 40 (#33 Billboard, #27 Cash Box) and “In the Heartland” from the album North Coast went to #6 on Billboard’s Top Tracks chart. Their video for “He Can’t Love You” was the 47th video ever played on MTV.[5] The band’s last Top 40 hit was “My Town” in 1983.

The band dissolved in 1987 with a series of 12 farewell shows at the Front Row Theater in Highland Heights, Ohio (suburban Cleveland) during the 1986–87 holiday season. Since then, Stanley performed regularly throughout Northeast Ohio with former members of MSB and with the Resonators and as Michael Stanley and Friends.[6]

In 2004, the sketch comedy troupe Last Call Cleveland produced Michael Stanley Superstar: The Unauthorized Autobiography of the Cuyahoga Messiah, a play which parodied Stanley’s status as a local celebrity.[7]

On June 25, 2019, The New York Times Magazine listed Michael Stanley among hundreds of artists whose material was reportedly destroyed in the 2008 Universal fire.[8]

Stanley was the co-host of PM Magazine on WJW Channel 8 from 1987 to 1990 and its follow-up Cleveland Tonight until 1991. He also appeared on The Drew Carey Show, playing himself.

Since 1990, Stanley had been the afternoon drive disc jockey for classic rock radio station, WNCX, in Cleveland.

Stanley died in his sleep on March 5, 2021, after suffering for seven months with lung cancer.[9]