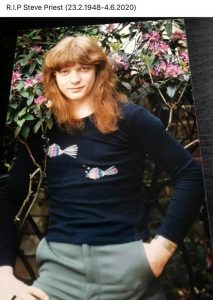 Priest was born in Hayes, Middlesex.[2] He made his own bass guitar and began playing in local bands as a young teenager, after being influenced by artists such as Jet Harris of the Shadows, the Rolling Stones and The Who.[2]

In January 1968, Priest was invited to form a four-piece band with vocalist Brian Connolly, drummer Mick Tucker, and guitarist Frank Torpey (b. 30 April 1947, Kilburn, North West London) – the band that was to become The Sweet.[2] Torpey was replaced by Mick Stewart in 1969. Guitarist Andy Scott joined in August 1970, following Stewart’s departure and the classic line-up established.

The Sweet was a band that went through many ups and downs. Initial success for The Sweet began in 1971, after the band teamed up with songwriters Nicky Chinn and Mike Chapman. However, The Sweet would pen a number of their own hits. Priest often directly backed up Brian Connolly’s vocals and took distinctive short high pitched vocal leads which was a key to their musical style at that time.

After Brian Connolly left The Sweet in early 1979, Priest became the main singer. This continued until 1982, when the original Sweet disbanded. By this time, Priest had divorced his first wife, Pat, and moved to New York City. On 18 June 1981, he married his current wife Maureen (née O’Connor), who was then East Coast Director of Publicity and Artist Relations for Capitol/EMI Records in New York. While in New York, he formed a band called the Allies with guitarist Marco Delmar and drummer Steve Missal. Success was elusive, although their composition “Talk To Me” was featured in a film, Fast Food.

Invited in 1985 by former bandmate Andy Scott to reform the Sweet, Priest declined. Shortly thereafter, Priest and his family relocated to Los Angeles.

During this period, Priest largely reverted to private life but made occasional forays into production and session work, as well as collaborations with other artists such as David Arkenstone and future bandmate Stuart Smith.

Priest did, however, go into a demo session in Los Angeles with the other members of the original Sweet in 1988, with Mike Chapman producing, to see if a studio album and reformation were possible. It is rumoured that the US record company MCA was interested at the time. However, the band members were unable to come to an agreement and the project failed. Despite the difficulties of the late ’70s, Priest continued his friendship with former Sweet lead singer Connolly, who was by now in poor health.

In 1994, Priest published his autobiography, Are You Ready Steve?, the title of which is taken from the intro to the Sweet’s “The Ballroom Blitz” when Brian Connolly counts in the song with, “Are you ready Steve? …Andy? …Mick? …Alright fellas, let’s gooooo!”, and in 2006, he released a CD entitled Priest’s Precious Poems.[2] In January 2008, Priest formed a new version of the Sweet, not related to Andy Scott‘s version of the band.[2]

This new band has played mainly festivals and venues in the U.S. and Canada. In early 2009, the band released a live CD, recorded in August 2008 at the Morongo Casino in Cabazon, California.

Priest lives with his wife Maureen and daughters Danielle and Margaret in La Cañada Flintridge, California.[2]