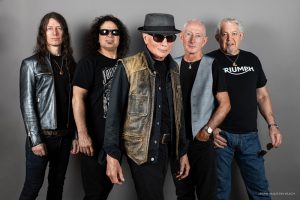 I was quite shocked and saddened, but not surprised, to read that at 70 Phil Mogg has decided to retire from UFO next year. 50 years in the band is just incredible! All credit is due to the stoic way he has kept the band going through the good, bad and difficult times (and the numerous changes of ‘cast’!).

Thank so much to Blabblermouth

UFO singer Phil Mogg has told Planet Rock magazine that the band is contemplating a special tour during which it would perform its 1979 live album, “Strangers In The Night”, in its entirety.

“We have talked about touring and just doing the whole of ‘Strangers In The Night’ — for the crack,” Phil said. “But we’re still about making new music. We’re recording a covers album, actually. We’ve done THE DOORS‘ ‘Break on Through (To The Other Side)’, THE YARDBIRDS‘ ‘Heart Full Of Soul’… but we don’t know what to call it.”

Mogg told TeamRock in a 2016 interview that he wasn’t entirely convinced by the idea of making a live album four decades earlier due to the fact that tensions had been building within the band for years.

“I didn’t even want to make a live album,” admitted Mogg. “At that point, the band was so up and down, depending on who’d been doing what. Wine, women and song was our priority, in that order. Suppose they recorded a dodgy night?”

Drummer Andy Parker agreed that the partying — not to mention the bust-ups — affected the band’s performances. “The intake was astonishing,” he recalled. “We’d have different types of booze for times of the day, for Christ’s sake. There’d be white wine for the soundcheck — nothing too heavy — and it would build from there during the gig and afterwards. You’d be up till four in the morning, then get up and do it all over again.”

As previously reported, UFO and SAXON will join forces for more dates in the U.S., plus two in Canada, in September and October. 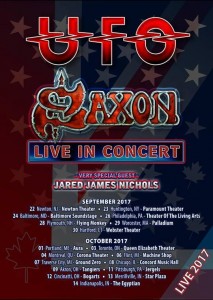 CHELSEA UNDER THE BRIDGE

CHELSEA UNDER THE BRIDGE [...]