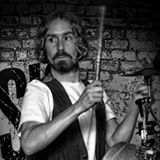 Brooks was born in Bow, East London. Answering a Melody Maker ad in early 1968, he joined Uriel, a blues-rock group formed by City of London School pupils Dave Stewart (keyboards), Mont Campbell (bass and lead vocals) and Steve Hillage (guitar and vocals). (The band re-grouped later under the name Arzachel and released one album in 1969.) With Hillage’s departure in mid-1968, the remaining three continued as a trio and became Egg in January 1969. The band signed with Decca and released two albums on the label, splitting up in July 1972 (although they came back together to record a final album, The Civil Surface in 1974).

Egg’s members first played together in Uriel, a Hendrix / Cream / blues / psychedelic group formed by school friends Steve Hillage (guitar), Mont Campbell and Dave Stewart. The line-up was completed when Clive Brooks answered their ‘drummer wanted’ ad in Melody Maker. Uriel began gigging in 1968 and in the summer of that year decamped to the Isle of Wight to play a club residency. Events from this trip were later immortalised in Egg’s anthemic ‘A Visit To Newport Hospital’.

At the end of the IOW stay Steve Hillage left the group to pursue his academic studies, later rising to fame as a ’70s guitar hero. Uriel continued as an organ trio and fell in with a management company who forced a name change of ‘The Egg’ on the band. After signing with Decca in mid-1969 the band evolved into a hard-working live unit who won many fans on their travels round the UK. Under the musical leadership of Mont Campbell, short songs began to give way to long complex instrumentals influenced as much by Stravinsky as by the odd time signatures of Soft Machine. Psychedelia continued to loom large in Egg’s consciousness, and when the group were let loose in a recording studio for the first time they revelled in the new sonic possibilities it offered, creating the deranged soundscape ‘Boilk’ on their first eponymous LP.

Egg and Decca parted company after the release of their second album The Polite Force, considered by many to be one of the finest prog albums ever recorded. Combining musical ingenuity, instrumental dexterity and super-tight performances, The Polite Force (produced by Neil Slaven) featured the much-loved ‘A Visit To Newport Hospital’ (whose opening fuzz organ riff is often mistaken for heavy metal guitar), the thoroughly mad ‘Contrasong’ and the intricacies of ‘Long Piece no. 3’, an extended instrumental piece in four movements. Accompanying these compositions is the nine-minute ‘Boilk II’, a multi-layered sound collage with psychedelic overtones.

Egg battled on for another couple of years before disbanding in 1972. Happily, a 1974 studio reunion enabled the trio to record several of Mont Campbell’s excellent compositions which otherwise would have been lost to posterity. Entitled The Civil Surface, this album was to be Egg’s last for 33 years.

After the demise of Egg, Brooks joined The Groundhogs, recording two albums, Hogwash (1972) and Solid (1974).

Following a riding accident in the United States in which Tony McPhee broke his wrist and so cut short the Who Will Save the World? tour. The following album, Hogwash, was a more experimental affair, as McPhee was temporarily limited on the guitar. A mellotron which was used on the previous album and synthesisers were brought into the band’s music. Drummer Ken Pustlenik left and ex-Egg drummer Brooks was brought in to replace him. In 1977, Brooks joined the UK band Liar recording two albums, Straight From the Hip and Set the World on Fire. A third album was recorded in Los Angeles but never released.

Brooks then became a regular drum technician for Pink Floyd, working with the band through to 1994. On 13 June 1981, the opening night of the last leg of The Wall tour, Brooks filled in for drummer Willie Wilson who had been taken ill.

Brooks was re-united with Stewart in 2000 for the recording of a cover version of Soft Machine’s “As Long As He Lies Perfectly Still” eventually released on Jakko Jakszyk‘s The Bruised Romantic Glee Club (2006).

Brooks has also worked as a drum technician for bands such as Toto, Robbie Williams, Jeff Wayne‘s “The War of the Worlds” 2007 tour and the Pink Floyd covers band, The Australian Pink Floyd Show. As of March 2008[needs update], he was working as the touring backline drum tech for Leonard Cohen.[citation needed]