BILLY COX THE CONCERT EVENT OF THE YEAR 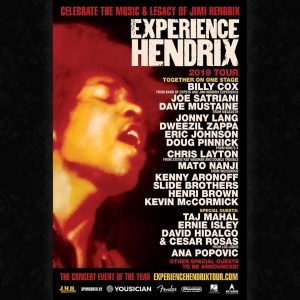 “That crowd out there will be sending us a lot of energy up on stage, so let’s take that energy, utilize it and send it right back to them”…Jimi to Mitch and me at Woodstock.

Over 45 years ago I began saying that the music of Jimi Hendrix would one day go in the category of Beethoven, Bach, Liszt, Handel, Gershwin, all the masters. I just never thought it would happen during my life time. Therefore, I’m always grateful when I have the opportunity to perform the music of Jimi Hendrix, music that I can proudly say that I played a part in helping to make…A lot of Jimi’s music, especially the music of the later years is more orchestrated. So, for me, I see it as only natural for a troupe of some of the best musicians in the country to assemble and to perform the music of a master…Jimi believed that music helps to make magic happen…So come on out and lets make some MAGIC on the EXPERIENCE HENDRIX 2019 TOUR…And thanks for keeping the Jimi Hendrix spirit alive!!! The Last Gypsy, Billy Cox