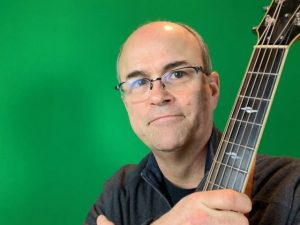 Brian Eyre – Modern Fingerstyle guitar player and composer:  I started off as an electric lead player in bands doing mainly original material, I wrote material, did lots of arranging and, of course, played lead guitar.

Everything changed about 10 years ago when I met a particular colleague who I heard was a guitar player.  I asked him what kind of material he played. He said “Fingerstyle”.  I’m a little embarrassed now to say that up until that point I had never even heard the term. So I asked him, “you mean like, fingerpicking?”.  He laughed and said “Ha! kind of…”. Once I started exploring it and heard what was possible, I WAS HOOKED!!

It’s been on a wonderful musical journey exploring the breadth of what “kind of” means: precision, harmonics, slapping, hammer on, etc… I’ve been influenced by so many great fingerstyle players, but especially Andy McKee, Michael Hedges, Don Ross, Antoine Dufour, Trevor Gordon Hall and Will Ackerman just to name a few. I like creating songs that are both melodic and rhythmic, while throwing in a few good harmonic twists and turns along the way.