Come join me & the guy’s @ Buddy Guy’s Legend this Saturday 💖💯💯💯💯. My special guest performing with us is, Brother John Kattke 😎😎😎😎. We take the stage at 8pm. Opening for Billy Branch & The Son’s Of Blues. So come out for a wonderful time 😜😜

The “Buddy Shows”, as fans have come to call them, will run Thursday through Sunday every week in January 2020 from Thursday January 2 – Sunday January 26.
January is the only time of year Buddy Guy does scheduled performances in his namesake club, consistently selling out the 16-show residency year after year, and delighting crowds that have traveled from all over the world. The Buddy shows are a chance for fans to experience one of the final surviving connections to an historic era in our country’s musical evolution. Hello and thanks for subscribing to our email newsletter. Keep reading for info on Buddy Guy’s 83rd Birthday Bash, our partnership with SEA Blue, and a look at our online T-shirt sale.!

Buddy Guy’s Legends is a Proud Partner of
The 15th Annual SEA Blue Chicago Prostate Cancer Walk and Run
SEA Blue is a celebration of life, of those who have risen to the challenge to fight prostate cancer, of the lives that have been lost to the disease, and of the people we will help to combat it in the future through Support, Education, and Advocacy. People affected by all stages of the disease band together and build camaraderie at SEA Blue through togetherness, tears and triumph.
Each September, close to 1,500 participants gather in beautiful Lincoln Park to participate in the SEA Blue Walk and Run. Please join us for a day of family fun, positivity, and empowerment. Register for the event, build your team (or join an existing team), and invite your friends to donate to help Us TOO International help those who are battling prostate cancer.
Sunday, September 15, 2019
8:00am – 1:00pm
1790 North Stockton
Lincoln Park, Chicago (at LaSalle and Stockton)
Register at www.seablueprostatewalk.org
Enter Code BUDDY19 for $5 Discount.
SEA Blue benefits Us TOO International Prostate Cancer Education and Support Network, providing educational resources and support services to the prostate cancer community at no charge.
SEA Blue is Presented by: Get more blues for your buck

Select T-Shirts are on SALE. Pick one up today!

The Mahindra Blues Weekend returns to Buddy Guy’s Legends on May 10th & 11th with another showcase of Chicago’s finest blues talent.

The weekend is part of an ongoing partnership between Buddy Guy’s Legends and the producers of the Mahindra Blues Festival, a huge annual gathering in Mumbai that hosts some of the biggest stars around. It’s a way of connecting the growing number of blues fans in India with the roots of the music in Chicago, as well as some of the rising stars on the scene. Buddy Guy’s Legends turns 30 this June! More info to be announced involving the celebration, but for now check out some of the new 30 Year Memorabilia on our online store. THE JANUARY 2019 BUDDY SHOWS
“The Blues Is Alive And Well”Tickets go on sale Saturday Nov 3rd at 10AM CT at BuddyGuy.com

Chicago blues legend Buddy Guy is back for 16 electrifying shows at Buddy Guy’s Legends in January 2019.

The annual “Buddy Shows”, as fans have come to call them, will run Thursday through Sunday every week in January 2019 starting Thursday January 3 and ending Sunday January 27. Tickets sell out quickly. A select number of shows will be broadcast live online.
In June of this year, Buddy Guy released his eighteenth solo LP ‘The Blues Is Alive And Well’, debuting at #1 on the Billboard blues chart. Special guests on the new record include Mick Jagger, Keith Richards, Jeff Beck, and James Bay.

NO REFUNDS / NO EXCHANGES

NO BAGS / NO BACKPACKS / NO BRIEFCASES/ NO COMPUTER BAGS

ALL TICKETS SOLD ARE GENERAL ADMISSION. SEATING IS NOT GUARANTEED. As Guy pushes forward through an astounding decades-long career, he’s careful not to forget those who inspired him along the way saying, “I went to sleep yesterday and woke up and all the great blues players are no longer with us. Muddy, Wolf, B.B.—they’re all gone. Before they passed away, when they were in their prime, we used to have a drink and a laugh and talk about how when one of us is gone, the others have to keep it going On August 2nd, join us for Buddy Guy’s 81st Birthday Bash!
Party with the blues legend himself, his friends and family with a night of food, drinks, and incredible music. (We’ll also be announcing the winner of the Sail With Buddy contest). The $30 ticket includes a souvenir cognac glass and a birthday toast of Remy Martin XO, Buddy’s liquor of choice. Get your tickets now!
More than 50% of the tickets to this show have already been purchased.

Of course you don’t have to wait until August to come by and say hello.
Don’t miss WALTER TROUT performing at Legends this Friday and Saturday! Buddy Guy’s Legends is the premiere blues club in the world, located at 700. S Wabash. Legends has live blues 7 nights a week, with free acoustic performances for dinner every night, and for lunch Wednesday through Sunday. Learn more at buddyguy.com

Blues Fest 2017 is next week! We’ve got an incredible lineup for you, with blues all day and all night (here’s our complete schedule). The week starts with the WXRT Blues Breakers Blues Fest Kickoff Broadcast on Thursday from 6:30pm-8pm, hosted by Tom Marker and featuring free live performances by Toronzo Cannon, Ronnie Baker Brooks and Shemekia Copeland. Then it’s nonstop blues all weekend, with shows by Toronzo Cannon, Eddy Clearwater, Lurrie Bell, John Primer and so many more. Get your tickets now!

And remember while you’re at the club to drop your name in the raffle for the Legendary Rhythm & Blues Cruise if you’d like a chance to sail the Caribbean with Buddy Guy.

57th Street Art Fair
If you can’t wait until next weekend to hear live music (and really, why should you?) stop by the Buddy Guy’s Legends South Side Stage at the 57th Street Art Fair on June 3rd and 4th. Catch acoustic blues and jazz and enjoy some delicious food, then check out the oldest juried art fair in the Midwest.

Live At The Lake!
Legends is also proud to announce our new partnership with Navy Pier. Join us in the Miller Lite Beer Garden every Wednesday night for live blues from the best bands in town, followed by fireworks. Headliners include Quinn Sullivan, Wayne Baker Brooks, Guy King, Corey Dennison, the NuBlu Band, and more.

This St. Patrick’s Day, the blues turns green. Buddy Guy’s Legends is having a St. Patrick’s Day party on March 17th, featuring Irish star Sharon Shannon. The acclaimed button accordian player has recorded and toured with a who’s who of stars from Ireland and beyond, including everyone from Bono, Sinead O’Connor and The Chieftains to Steve Earle, John Prine, Willie Nelson and Allison Krauss. Her multi-platinum records blend a love of many genres with her deep traditional Irish roots.

The St. Patrick’s Day celebration will also be a special preview of her latest album, Sacred Earth. It includes a guest appearance on guitar by Legends’ own Greg Guy, Buddy’s son. Harry Mura opens, and Keithen Banks will play the free acoustic dinner set.

Get your tickets here. 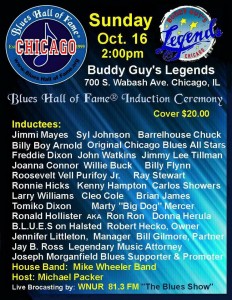 Big names, up close and personal. The next great performers in the Intimate Concert Series are Booker T Jones, Walter Trout and Charlie Musselwhite.

June 13: Booker Tbecame famous with his group the MGs for recording iconic tunes like Green Onions at Stax Records. This show is going to be crazy because Buddy Guy is playing the Chicago Blues Fest across the street earlier the same night, and has already announced plans to come back to Legends afterwards to catch the show; he’s expected to bring roughly half the city with him. If you want to be in the room with two Grammy-winning legends instead of on the sidwalk with your ear on the window, you shouldbuy your tickets now.

Aug 14: Walter Trout is a former member of Canned Heat and John Mayall’s Blues Breakers who broke out on his own in 1989 and has been traveling the world playing the blues ever since. A liver transplant brought him back from death’s door, and now he’s showing off his newly recovered vitality with the same wild energy that made him famous to begin with.

Aug 22: Charlie Musselwhite is a harmonica legend who knew and played with many of the most iconic figures in Chicago blues: Muddy Waters, Little Walter, Howlin’ Wolf, and John Lee hooker just to name a few. He’s been wailing on the harp ever since, with hit albums from 1966’s Stand Back! to 2014’s Grammy winning collaboration with Ben Harper, Get up!