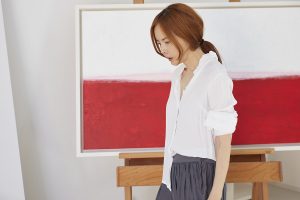 The contemporary Artist CHO Yea Jae (Busan, South Korea) will participate, along with thirteen other renowned Korean Artists, in the Casa Asia project, curated by Menene Gras: “fourteen Short Stories”. Yea Jae has been selected to participate in this collective exhibition for her ability to awaken the viewer through her work with the possibility of experiencing new paths of knowledge.

“As Curator of the” fourteen Short Stories “exhibition, I am pleased to notice the work of Cho Yea Jae, as an Artist and as a woman who knows how to conceive her work by exploring the aesthetic experience associated with creation, without ever losing sight of the materials and formats in the two series represented that she keeps open and in constant expansion “. Menene Gras Balaguer – Director of Culture and Exhibitions – Casa Asia

Yea Jae participates to this exhibition with five works that are part of her two iconic series: “Ready to Open”, born in 2011 and of which she presents here with two works, and “Transcendence”, a series that began in 2015 and of which she exhibits three large works. Both series have in common the fact that they are nourished by two essential and constitutive sources of the Far East world which are Buddhism and Confucianism both in its philosophical dimensions, these are present in the pictorial work of the artist, who also spends much of her time living in the West. From all this, the Art Critic Francisco Carpio deduces that “although her personal roots have a strong presence in her work, one of her distinguishing marks is likewise, an open, global, even unitary gaze, which she casts upon the world to understand it, feel it and ultimately, as an artist, express it”.

Yea Jae’s conceptual style, based on minimalism, abstraction, and the purest of aesthetics marked as delicate, brings a subtlety that seduces and invites the viewer on an infinite journey. All this has a lot to do with the philosophical and vital reflection of the Artist who wonders about the condition of being, starting from the oriental thought and conception of existence, an element with which she nourishes her personality and, therefore her work.

In 2018, Yea Jae established her second residence in Barcelona and this year she inaugurated her new studio-workshop in the coastal town of Sitges (Barcelona). She currently works between Korea and Spain. In addition, she has traveled and lived in numerous countries in Europe and Asia. The fundamental pillars on which her creativity rests are philosophy, society, culture, the environment (landscape / nature) and science, which, due to her university training, has been very present in her life and her work. In 2000, she exhibited for the first time in Hong Kong. Since then, she has had numerous solo exhibitions in that city, as well as in Singapore, Paris, and New York. Likewise, her work has been presented in several group exhibitions as well as international Art fairs. CHO Yea Jae is the only Korean artist to have participated in the twelfth edition of the contemporary Art fair JUSTMAD 2021, recently held in Madrid (July 2021).